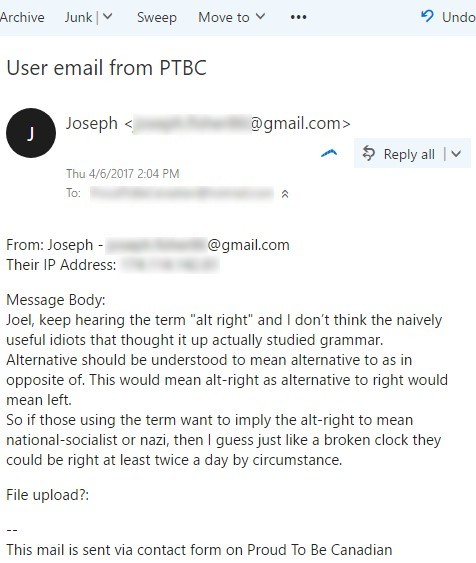 Mail delivered to me in a fashion at odds with the quaint traditional postal mail methods of yore. And then answered in a similar alternate fashion.

I think what the “alt-right” folks intended to mean was “an alternative to the traditional, or ‘establishment,’ or commonly-known version of the right,” rather than anything like the opposite of the right.

As you know, nobody, not the right, not the left, not libertarians, not moderates, not the gay set, not Mexicans, not jihadists, not ‘working families’, not the ‘news’ media — nobody — even knew what in tarnation “alt-right” meant, until maybe a year ago.

Everybody immediately pretended they’d known the term for years and years, and knew just precisely what it meant because of course they’re so hip and smart. Nobody actually knew, and still don’t, because there is not “alt-right” manifesto or constitution or head office or clubhouse.

As soon as the cool kids started using it the term was brought into the sunlight and immediately used — by the left only — as a way to smear conservatives or Republicans who liked Donald Trump. They used the term as synonymous with “racist” or “Nazi” or “irredeemably deplorable” (or pick from the Left’s menu of other hate-smears).

If you’re like me, when I first heard it, I thought it meant more something along the lines of “neo-con” or just another version of the conservative-right, which was just as palatable as most of the other member-groups of the conservative family, like the Log Cabin Conservatives, but just with yet another distinct angle.

I was always fully aware that Breitbart had some edgy — just edgy; no, not “racist” or “Nazi” — articles, but I always took them in the context in which they were intended to be taken, and read them as a grown adult with a half-ass brain, instead of an idiot man-child like so many on the Left and in their media division.

I still don’t know even remotely know what “alt-right” means.  I brush it off as another bullshit term invented by yahoos. Millennials. Or hippies. I don’t bother to call myself “alt-right” mostly because I refuse to let the idiots on the left define me, especially if they’re trying to define me as racist, or as a “Nazi” (even though it really just makes them look like the total imbeciles they are).

I’m a conservative and I like Breitbart.com. And that’s alt-OK.