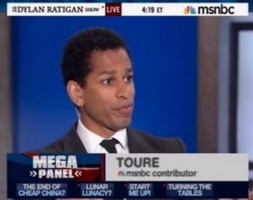 With due respect to Jonah Goldberg, this is what I call my J-file  —  a compendium of somewhat related thoughts.

First up: a Tom Brokaw quote: “Obama’s Scandals Aren’t As Big As Watergate, Iran-Contra, Or Even Abu Ghraib“.  (After reading this, also see “Tom Brokaw: It’s ‘Far-Reaching’ to Think You Need Guns to Fight Back Against the Government“).

In fairness (though why should I be the only one?), he was discussing the usual deflective anti-conservative constructs on the far-left (and failing) MSNBC division of Obamaworld, and, what’s more, he was discussing these matters with a fellow panelist named Touré. Yessir, just Touré. A one-named wonder, with one goal: to bash anything not left-wing.

First, Brokaw’s statement is absurd on its face. With the exception of Watergate, they are not merely “as big”, they are clearly bigger, in almost every way. Which makes Brokaw and his position as an elder statesman of the supposedly sensible dissemination of information and useful perspective  —  supposedly objective by virtue of his being a lifelong newsman  —  an abomination of the first order. By which I mean an Obama-Nation of the cult order.

And secondly, as if he doesn’t know, (and trust me,  —  and this is the worst part, actually  — he does know), if the media doesn’t even cover today’s scandals, as they really aren’t, at least willingly, then of course it won’t be “as big as Abu Ghraib.” It’s literally begging the question, in logical terms.

So it’s also worse in that way too: the media actively smashed Republican administrations with countless scathing articles and investigative journalism, but help Obama and his various coverups by writing and reporting nothing.

And that media perfidy  —  the purposeful selective (based on politics) omission of news coverage, or the spin they construct (or parrot) on behalf of their ideological leaders, or the full-on coverup of pertinent details, or the glib whitewashing of Obama administration corruption, is, in and of itself, a scandal easily matching any of the above. But for obvious reasons it’s one which neither Touré nor Cher nor Madonna nor Prince nor almost any non-Fox News Channel media ever dare ask the Left  —  including, sadly, the newsman like Brokaw  —  about.

There’s more than one scandal or set of huge scandals going on here, and they involve many facets of America’s Left  —  its politicians, its media hacks, its academic hacks, and its cabal of useful idiots in Hollyweird, etc.

If Americans can’t trust the these institutions  —  perhaps especially the news media, which has assumed the responsibility of objectively holding the government’s feet to the fire on behalf of citizens, then we’re in for a very rough ride. (Don’t get me wrong, as I know those of the Left are wont to do: some institutions have a right to be biased; but others, like publicly-funded academia, do not have that right, and yet their ideological brethren in the other institutions are totally cool with it).

Third, we don’t need Brokaw to give his official endorsement on the matter anyway. Who made him the official purveyor of bona fides? We don’t need him to legitimize (or delegitimize, as in this case) the fears and outrage felt by those of us on the right about the horrendous behavior of the Obama administration, and government in general, and the Left  —  nor especially about the perfidy of the aiding and abetting media division, such as MSNBC. This is like Holder investigating Holder. Which, amazingly, Obama has charged Holder to do, to utterly no curiosity or outrage from the media (in fact quite the opposite).

This official self-anointed elitist endorsement thing…
…Whether it’s by government (which, ok, we do sort of “anoint”) or their acolytes in the highly self-esteemed and self-aggrandized media (such as Brokaw) on the left and far-left, has been a thorn in my side forever. And it extends beyond government corruption-related news or even any news at all, and right into the realm of community life.

But particularly as it pertains to big gov: not an event goes by  —  not a town or community fair, not a civic holiday, not a marathon or car race, nor of course the now ubiquitous and left-wing politics-driven gay pride parade (don’t get me started on those gawd-awful things)  —  can escape the official endorsement of do-gooder progressive government officials who feel they must somehow show their ever-so natural “oneness” with their communities by decking out a flashy convertible and riding right in the parade, all smiles and hand-waving and fake-pointing at fake friends in the crowd; or by buying a huge display ad in the local media  —  which always includes a huge photo of their smiling mug  —  and/or otherwise mounting their official “welcome” or “congratulations,” or “merry” or “happy,” or “good luck” or “I’m part of this” or “I endorse this”… say-so. I don’t need them to sound off on every single thing in my life, thanks. In fact I need them to not do so.

It’s as if nothing is official, or legitimate, or worthy, or even real, these days, without some government official chiming in about it in the most public way possible; and as if to add insult to injury, it’s usually done using taxpayer dollars by, for example, buying that large display ad in a local paper with a huge portion of it displaying their smilin’ mug, which is something most small businesses could ill-afford to do, even though their doing so might drum-up actual, legitimate productive business and commerce (to say nothing of tax revenue).

Community events and day-to-day life have almost nothing to do with government, usually, or at least they should not. Communities are capable of mounting events without the meddling by governments, their intrusions, or their official nod.

I seem to have to remind people that this isn’t North Korea, China, or Cuba.

Another mind bruiser:
The just-announced she’s not running next time GOP Congressman Michele Bachmann, among other things in her long and worthwhile political career, ran the so-called Congressional Tea Party Caucus, which did nothing for the tea party; in fact it eroded the concept of the tea party being a totally non-partisan, grassroots organization of plain citizens, and, frankly, made a mockery of tea party ideals across America (and from where my computer is plugged-in at the moment, across Canada too). Too many politicians have aligned themselves with the once-burgeoning tea party movement, ruining it, in my humble opinion. I wish Bachmann well, but after a dozen years of her, I can’t say I’m sorry to see her go, and I hope she leaves the tea party to the rest of us.  We need the tea party more than ever before.