Home Columnists Crying Rape
Share
Facebook
Twitter
Pinterest
Linkedin
ReddIt
Email
People often assume that self-described liberals are more  supportive of due process than self-described conservatives. That  certainly isn’t the case when we talk about the illiberal bureaucrats  who run the United States Department of Education.

The notion that an adult charged with a felony should be put on trial  using the same standard of evidence used for someone who has been  issued a parking ticket is absurd. In fact, it is more than absurd. It  is offensive to well-established principles of due process and  fundamental fairness.

Recently, however, the Department of Education’s Office for Civil  Rights (OCR) has announced new guidelines that will force due process to  take a back seat to political correctness. These guidelines will apply  to sexual harassment and felony sexual assault cases.

The OCR has decided to teach universities something they already  know; namely, that sexual assault and sexual harassment are serious  offenses. In the process, however, they are putting innocent students at  risk of being wrongly convicted of offenses that could potentially  destroy their careers and reputations.

According to the new OCR guidelines, any college that accepts federal  funding or federal student loans (close to 100% of our nation’s  colleges) must now employ a “preponderance of the evidence” standard of  proof in sexual harassment and sexual assault cases. This lowered  standard replaces the traditionally accepted standard of proof beyond a  reasonable doubt, which, according to most triers of fact, is close to  100% confidence of guilt. In contrast, “preponderance of evidence” means  the campus judiciary only needs to be 50.01% confident that a person is  guilty of a given offense – even if that offense is rape, which,  regardless of degree, is always a serious felony.

This mandate from the federal government will have profound real-life  costs for real students. If we learned anything from the infamous Duke  Lacrosse case it is this: Academia is quick to blame people for creating  a “rape culture” on campus and slow to take responsibility for false  accusations.

Unfortunately, Duke was not an isolated case. At Stanford, student  jurors in sexual misconduct cases are actually given “training  materials” that say things like, “Everyone should be very, very cautious  in accepting a man’s claim that he has been wrongly accused of abuse or  violence” and “An abuser almost never ‘seems like the type.'”

In other words, even highly respected universities like Stanford try  to create unfair and partial juries prior to rape adjudications – in  clear violation of the spirit of the 6th Amendment (Do you remember when  liberals cared about the “spirit of the law”?). Adding a mere  “preponderance” standard to such a toxic environment would be a recipe  for disaster – disaster in the form of wrongful felony convictions.

The OCR mandates are not merely confined to actions. They apply to  students’ speech, too. Columbia University already lists “love letters”  as a form of sexual harassment. The University of California, Santa  Cruz, classifies using “terms of endearment” as sexual harassment. (Who  could have ever imagined that one could be endeared and harassed at the  same time?). At Yale, “unspoken sexual innuendo such as voice  inflection” is considered sexual harassment. The absurdities are  seemingly endless in 21st Century “hire” education.

Shortly after the evidence revealed that the accuser in the infamous  Duke Lacrosse case was lying, I wrote a letter to Duke Professor K.  Holloway. She was the ringleader of the “Duke 88” – a bunch of  professors who publicly accused the Duke Lacrosse players of both rape  and racism before they had their day in court. In my letter, I urged her  to take responsibility for damaging the reputations of innocent  students at her own university. Her response is printed below in its  entirety:
<blockquote>“Mr. [sic] Adams: You have made the error of  anticipating that I have some interest in what you have to say. I do  not. K. Holloway.”</blockquote>
Professor Holloway may not be a rapist. But she is clearly a racist.  Nonetheless, she has inspired me to write to the OCR with a modest  proposal for handling sexual assault cases on college campuses.

I plan to write to Professor Holloway because I anticipate that she  has some interest in what I have to say. My anticipation might be in  error. But, unlike sanctimonious feminists, I’m prepared to face the  consequences if I’m wrong.

Romney and the Rapist 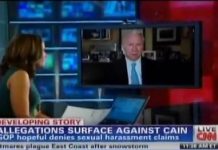 Video: CNN plays wrong half of Fox News’ Cain interview. Then analyze his failure to address the matter.