“We shape our buildings; thereafter they shape us.”

Art is powerful. Through art nations have been swayed toward greatness … and toward Obama. Via the arts souls have been lifted and wars have been waged. There’s no mistaking the mighty leverage art wields on people and lands.

For instance, on a personal level, my buddy Hambone Tweedle lives in a house that his wife has decorated with Hello Kitty swag, ubiquitous doilies and posters of fat baby angels who look like they’re stoned out of their gourd on Robitussin. His flat looks like Jan Crouch, Ross Matthews and Gianni Versace’s ghost had an open-ended interior design budget and went flippin’ nuts on the place. The home he’s henpecked to dwell in is a ghastly chick hell. The place screams, “This is no place for old men!” He’s emasculated. It’s a fait accompli for his cojones.

From a national standpoint, do you wanna know why folks in Communist nations are depressed and are forced at gunpoint to smile when U.S. cameras are rolling? Well, one reason, aside from the mediocre hell Communism spawns, is their art. It’s hard to feel chipper when the only works of art you behold are giant prints of the inbred dictator and the utilitarian gray block buildings he skimped on so he could have gold toilets in his 90-room mansion.

Seriously, in the Giles Manor I have trophy animals and paintings of trophy animals, African warriors and Native American Indian warriors adorning my walls. Why do I have such a man cave? Well, one reason I have it so designed is we have three women in the house, and I’ve got to do something to offset all the bras and panties strewn everywhere. In addition, these awesome animals and warriors feed my soul. When I gaze at them it makes me feel stupid and weak when I whine like a 12-year-old girl if I don’t get my way.

Being fascinated with butt kicking beasts and people, I was duly impressed when I saw the digital painting that artist David Bugnon (Boo-nyon) did of the late Andrew Breitbart. David absolutely knocked it out of the park with his painting depicting Andrew as the consummate intellectual warrior that he was.

When it came to the cause of truth, Breitbart was one in a million: a provocateur par excellence. I saw his combatant spirit up close and personal when he and my family went through the 2009 ACORN scandal that my daughter Hannah Giles stirred up via her investigation.

Yep, Andrew would happily fight people, organizations and governments with tooth, fang and claw if he sensed any anti-American, BS-laden sentiments stemming from said lemmings, and Bugnon’s piece captures AB’s essence as a contrarian: confident and geared-up.

Look, I’m not a big fan of having paintings of contemporaries on my wall—especially paintings of other men; however, I’ve made room on my wall for a nice reproduction of Bugnon’s painting because I admire, appreciate and wish to emulate the moxie Andrew perfected for that which is just and true. I think I’ll put my print by my front door so as I depart my house and dive into the cultural trenches I will be ever mindful, thanks to Andrew’s example, that there are things worth scrapping for—and America’s founding docs are definitely one of them. 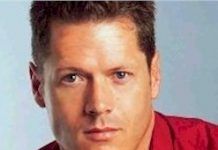 How I Came to Admire Andrew Breitbart 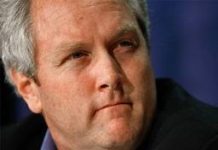