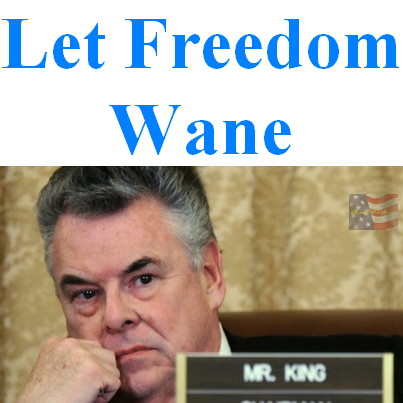 Congressman Peter King is not just a disgrace to the Republican Party, inasmuch as “safety first” politicians like him are a bipartisan disgrace to America.

As a member of the House Homeland Security Committee and Chairman of the Sub-Committee on Counter-terrorism and Intelligence, King is a reliable and ubiquitous proponent of whatever the federal government wishes to do with your personal information, private communications, or your body, no matter how obscene, in the name of winning the infinitely elastic “War on Terror.”

Often combining spittle-flecked indignation with breathtaking ignorance, King pops up on cable news whenever the indefensible needs defending, or to impugn those who dissent from his view that there is nothing untoward in the mass surveillance of supposedly free citizens by their government. 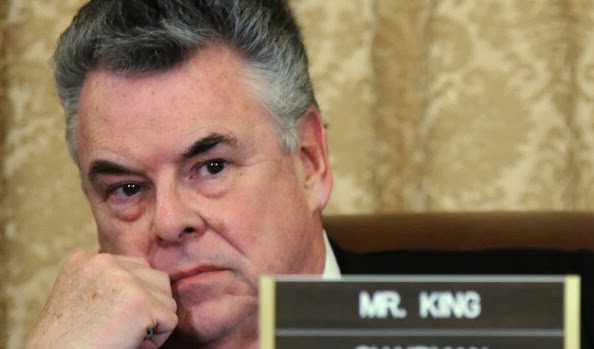 Most recently, King blew a gasket on Fox News over a New York Times editorial suggesting clemency for Edward Snowden (this column called for his pardon last year).

Snowden, of course, is the former National Security Agency contractor who revealed the government’s massive surveillance program to the world, and is hiding out in Russia for his trouble.

Now, I have no use for the New York Times and, even if I owned a parrot, I like to think my affection for the bird would be sufficient to find something of higher caliber for its cage.

That said, it is eminently possible to disdain the Times while simultaneously determining that Peter King is almost always dead wrong.

His calculus is that no matter how excessive and intrusive security protocols are, or how omniscient the NSA becomes, it’s worth it to stay safe and defend freedom.

Travel through a US airport, or a land border crossing, or one of the security “checkpoints” cropping up, and ask yourself if this is a free country. If it all seems tickety-boo, Rep. King’s PAC would be delighted to hear from you.

As to Snowden, it is disquieting to see politicians attempt to burnish their anti-terror street cred by grasping for new ways to call him a traitor. It is a malign irony that they do this while enjoying the perquisites of Congress and collecting government paychecks, even as they labor to make the “Land of the Free” less-so.

It is truly appalling for people who lead cosseted lives, neglecting their sworn duty to defend the US Constitution, to sneer at those who defend it for free, or at great personal cost.

Yet King will never be without a home, a salary or a pension, he will never miss a meal or fear for his life. For the rest of his days, he will be comfortable and free to advocate the circumscription of his countrymen’s liberty.

Having locked up his New York constituency decades ago, and congressional incumbency being what it is, King could run successfully for re-election wearing a Ronald McDonald costume (which would no more beclown him than his stated opinions do). Has America lost its sense, or is it just Long Island that’s out where the buses don’t run?

Snowden’s suffering is no proof of nobility, and he has made mistakes. Critics, including King, are fond of saying Snowden should have gone through “proper channels” with his concerns, rather than fleeing to the arms of unfriendly nations.

But this has always been illogical, as though their complaint with Snowden is how he did it, rather than what he did. Since King and other NSA enthusiasts, including President Obama, insist that there is nothing wrong with the agency’s surveillance program, how likely is it Snowden would have had success going through “proper channels”?

There are precious few glimmers of hope. Republican Sen. Rand Paul of Kentucky is filing suit against the NSA for its surveillance activities, and mused that perhaps Snowden and Director of National Intelligence James Clapper could share a prison cell. After all, if Clapper can lie to Congress, routinely violate Americans’ Fourth Amendment rights, and betray the trust of our allies, why should he be treated less harshly than Snowden, who simply told us about it?

Columnist Jonah Goldberg recently listed misconceptions liberals and conservatives would be wise to eschew in the New Year. The latter group, he advised, should cease taking for granted that there is a vast, silent majority who share their views.

As the security state grows, perhaps those of us who are alarmed and disgusted by it should take a similar approach. For example, in 2010, when US airport security ramped up to the full-blown obscenity it is today, I averred that this travesty would be corrected post-haste. Mistakenly thinking Americans to be the freedom-minded renegades of national myth – rather than the obsequious, obedient incarnation of modern citizenry – I expected them to rise up the first time a child was traumatized or a wife was objectified or a veteran was humiliated by this insane regime.

Demonstrably, I was wrong.

Snap out of it, America. As 2014 dawns, you are among the least-free developed nations in the world and nincompoops like Peter King are making it worse in the name of “security.” By the time you recognize what’s happening, will it be too late?
[author_bio avatar=”yes” name=”yes”]