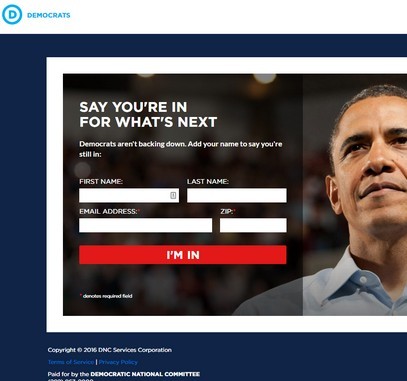 [dropcap]E[/dropcap]verybody had to laugh when during the campaign Bill Clinton tried to | pass Hillary off as a “change candidate.”

This is a change election. The question is what kind of change do we want?

The Democratic Party seems to beg to differ. And here’s the link they escorted me to with “http://my.democrats.org/Next”:

So “WHAT’S NEXT,” to them, means… no change? Just more Barack Obama? What happened to Hillary?

It’s hard to read this as an endorsement of Hillary Clinton’s efforts or ideas or a plan to keep fighting for them, “next,” or to keep fighting for anything resembling the future. Apparently it’s all about fighting to save the past. Fight for the past! (They used to condescend to Republicans by claiming Republicans just wanted to bring America “backward” into the past. Now? The past was so cool!).

I imagine they’re actually just resolved to fight to save Obama’s legacy, now, and “next.”

But what they also don’t seem to realize is that the country largely rejected Barack Obama as well.

They’d have been better off having a picture of a thumb than either Hillary Clinton or Barack Obama. 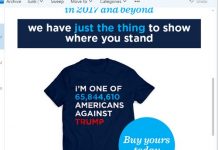 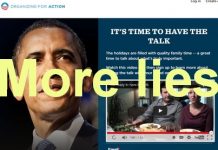 Obama’s OFA uses family and “holidays” fake-out, to get Obamacare support and cash 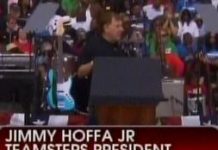