Home Bold Blog Get ready for 4 to 8 years of picayune media. Today: sneers...

[dropcap]Let[/dropcap] me start by saying I want one! You can get them for me here: https://shop.donaldjtrump.com/

For the “holiday” season (Christmas to the rest of us), the sneering liberal media (NBC station KING5 in Seattle in this case but they’re all doing it) is gathering all their impotent rage and slamming the Trump Christmas ornament, for sale at Trump’s campaign store.

'Trump loves Christmas' so he made a $149 ornament https://t.co/IY03LSsNpd pic.twitter.com/fCKAaHgRpn

They’re all doing it just as smugly as possible, trying to make a joke out of it, and in so doing, predictably, they’re failing, again, and moreover, failing to see that Trump already beat them to it. Again, the joke’s on them. I’ll bet the Trump shop has sold tens of thousands more of these babies than they might have otherwise.

And they’ve filled the Amazon.com page selling the stuff with comments slaying Trump and his audacity to sell stuff, and as if I had to tell you, the “fact” that Trump is a racist whiste supremacist Nazi dumb-ass and Jew-hater with stupid hair. Comment tweeted by liberals at least 200,000 times: “Trump is making Amazon comments great again.” Calling Trump a Nazi is what’s “great” to liberals.

So thanks for the laugh, libs.

The Seattle NBC affiliate joins absolutely every other smug media in failing to mention that the Obama White House also sells a slew of rather expensive and rather useless Obama trinkets. Let’s look at what liberals apparently buy! 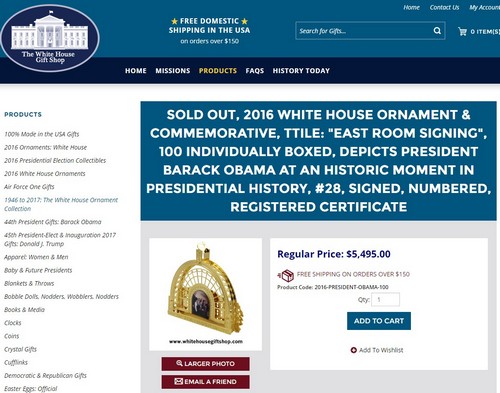 I’ll take four! No not really, I have food and clothing to buy for the the next year and a half! But liberals don’t you worry. There’s lots of stuff for you if you’re on a tight budget getting ready for your emigration to much more expensive (and currently liberal, but don’t hold your breath) Canada, and thus you may not be quite up to paying $5,495 too for that Obama trinket.

And for Trump fans, new White House stuff is on its way!

I fancy the notion that the Obama White House gift shop politburo had the full range of Hillary’s portrait and hot chocolate mugs and trinkets all ordered-up, printed, and and ready to ship, but then that awful Donald Trump came along and wrecked it all! But don’t get even sadder than you already are, liberals, leftover Hillary campaign wear might be a good buy these days for your (((failure))) memorabilia collection. Try this one on for size: 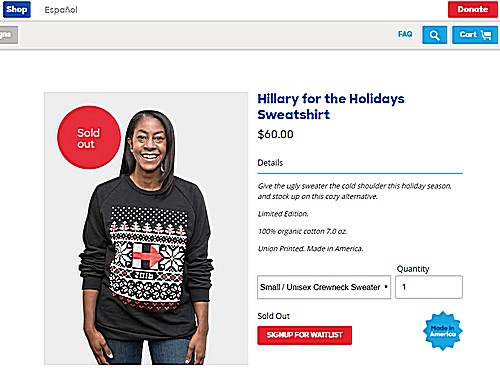 I’m no fashion guru, but it looks like a hot mess to me. And $60? Holy not-ready-for-Walmart. (Since it’s sold out, I’m wrong apparently — or there are a lot of liberals walking around looking like hot messes. I’m betting on the latter).

But for libs, this item hits you with lots of yummy lefty PC imagery and buzzwords:

2. Then it’s a “Limited edition” which by lucky chance speaks to how they view themselves  — their elitism and sense of moral and intellectual superiority over most Americans.  Check!

3. The “100% organic cotton” is just fun — like anybody on earth is thinking “Yeah! Down with cotton grown with chemicals!”  Check!

4. The fact that it is “Union printed” is actually just hilarious. This is a “dog whistle” if ever there was one. It sets up a whole bunch of nationally divisive ideological arguments:

…which is all just classic liberal/Democrat.  Check!

5. “Made in America” is de rigeur for U.S. presidential candidates’ swag.  Check!

6. And what about males/female sizes? Nah! “Unisex” — like liberals want all people to actually be.  Check!

Golly you’d think she’d have won with all that PC-crap-speak.

For you even deeper socialists, there was Bernie Sanders swag too — his store appears to be shut down now, possibly heading for Cuba. He did accept credit cards, which is hilarious inasmuch as that’s so capitalist! But man! $30 for a simple T-shirt? Socialism costs so much! 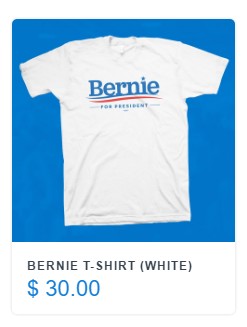 The biggest graphic on the page by far is this union-made graphic (made much smaller to fit on this web site):

Happily, so many union workers simply made those trinkets for Team Hillary and Team Bernie, and then when they were laid-off, voted for Trump. Now they’ll likely get lots of work making stuff for America.