The 2010 Congressional elections message is being totally lost on Democrats and their media in this current debt debate.  Unfortunately they will not be the only losers.

President Obama has been using the debt-ceiling debate and bipartisan calls for deficit reduction to demand higher taxes. With unemployment stuck at 9.2% and a vigorous economic “recovery” appearing more and more elusive, his timing couldn’t be worse.

Two problems arise when marginal tax rates are raised. First, as college students learn in Econ 101, higher marginal rates cause real economic harm. The combined marginal rate from all taxes is a vital metric, since it heavily influences incentives in the economy—workers and employers, savers and investors base decisions on after-tax returns. Thus tax rates need to be kept as low as possible, on the broadest possible base, consistent with financing necessary government spending.

Second, as tax rates rise, the tax base shrinks and ultimately, as Art Laffer has long argued, tax rates can become so prohibitive that raising them further reduces revenue—not to mention damaging the economy. That is where U.S. tax rates are headed if we do not control spending soon. 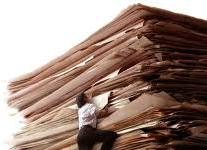 I’m working on my taxes. So I’m getting no work done.

Temperature was supposed to be 75, but only hit 72. Therefore, it’s minus 3 today.