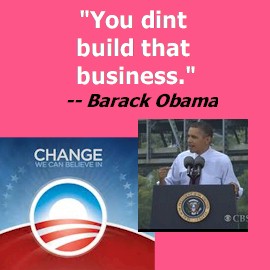 I loved this James Taranto/Wall Street Journal column this morning:

You Didn’t Sweat, He Did

Constructing a sentence is hard work when you’re the World’s Greatest Orator.

“If you’ve got a business, you didn’t build that.” If the World’s Greatest Orator turns out to be a one-term president, it is likely to go down as the most memorable utterance of his career. Mitt Romney certainly hopes that happens. HotAir.com’s Ed Morrissey has highlights of Mitt Romney’s response, in a speech yesterday at Irwin, Pa.:

The idea to say that Steve Jobs didn’t build Apple, that Henry Ford didn’t build Ford Motor, that Papa John didn’t build Papa John Pizza, that Ray Kroc didn’t build McDonald’s, that Bill Gates didn’t build Microsoft, you go on the list, that Joe and his colleagues didn’t build this enterprise, to say something like that is not just foolishness, it is insulting to every entrepreneur, every innovator in America, and it’s wrong.

And by the way, the president’s logic doesn’t just extend to the entrepreneurs that start a barber shop or a taxi operation or an oil field service business like this and a gas service business like this, it also extends to everybody in America that wants to lift themself [sic] up a little further, that goes back to school to get a degree and see if they can get a little better job, to somebody who wants to get some new skills and get a little higher income, to somebody who have, may have dropped out that decides to get back in school and go for it. . . . The president would say, well you didn’t do that. You couldn’t have gotten to school without the roads that government built for you. You couldn’t have gone to school without teachers. So you didn’t, you are not responsible for that success. President Obama attacks success and therefore under President Obama we have less success and I will change that.

There’s a website called didntbuildthat.com with a variety of hilarious treatments of the Obama philosophy. Of course, whoever’s running the site didn’t build that. As he acknowledges, Al Gore did. And hey, remember Julia, Barack Obama’s composite girlfriend? At 42, she starts a Web business. Under President Obama, she didn’t build that.

Read this. Or get society to read it for you. Because you didn’t read that even if you did. See.

Here’s more great writing and reading which society could read for you in lieu of you taking the personal initiative, from the brilliant (I mean it) Thomas Sowell:

His latest verbal triumph was to say on July 13th, “if you’ve been successful, you didn’t get there on your own.” As an example, “Somebody invested in roads and bridges. If you’ve got a business — you didn’t build that. Somebody else made that happen.”

Let’s stop and think, even though the whole purpose of much political rhetoric is to keep us from thinking, and stir our emotions instead.

community that created the things that facilitated their success is, again, something that sounds plausible to people who do not stop and think through what is being said. After years of dumbed-down education, that apparently includes a lot of people.

Take Obama’s example of the business that benefits from being able to ship their products on roads that the government built. How does that create a need to “give back”?

Did the taxpayers, including business taxpayers, not pay for that road when it was built? Why should they have to pay for it twice? …