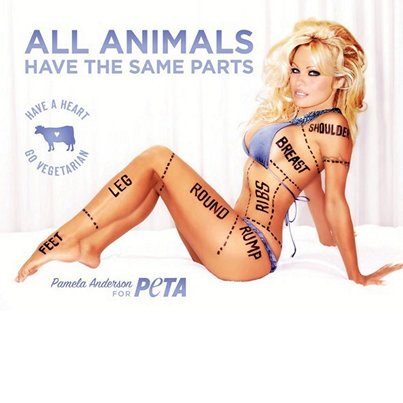 “Gun are people too!” sounds like a turn on the idiotic PETA memes where they raise the status of a lowly farm animal like a chicken to that of a real person.

When problems arise, most people blame that which actually caused the 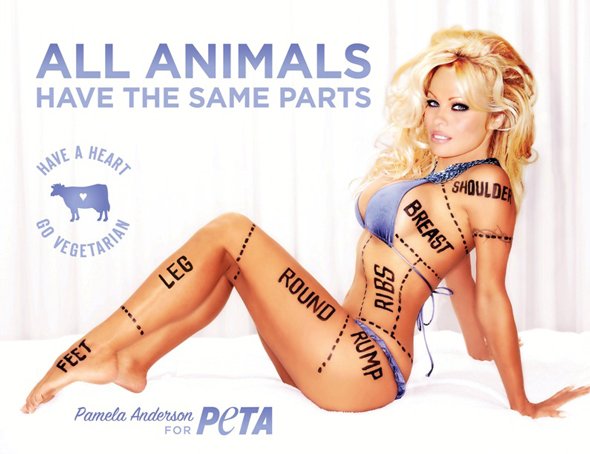 problem. This is a habit of pure logic that liberals like President Barack Obama could learn, inasmuch as they and he are the cause of most of the problems, yet they and he choose instead to blame “Bush.”  Or Fox News.  Or “the 1%,”  or the banks, a tsunami, Europe, or the weather.

The last time you read about a drunk driver careening into a crowd of people and killing them all… well I just gave away the ending, didn’t I?  The point is that the skillful reporter who is not drunk blames the DRIVER. Not the CAR.

That’s manifestly because the driver killed the folks. Cars don’t suffer mental maladies, and cannot make poor choices. Which is why I’d rather see cars in office than Obama and his administration. But I digress.

When it comes to gun-related violence, the liberals like Obama (he’s the AR-15 of liberals  —  snarf!) and his absolutely like-minded fan-boy media reflexively blame the gun instead of the usually mentally-deranged shooter. Well actually they blame Sarah Palin, the NRA, conservatives, gun “clingers” (hi Barack!), Republicans, and even gun manufacturers (kind of like blaming GM for the drunk-driver slaughter  —  and then Barack Obama for bailing them out!). And others too numerous to mention. But mostly the gun. It’s like they’re idiots.

Nate Beeler, cartoonist for the Columbus Dispatch (Ohio), was bang on with this editorial cartoon, today. At the risk of putting words in Nate Beller’s mouth, it seems to me he’s mocking the asinine group-think liberal mainstream media for what is really their obvious liberal-left, agenda-ridden reporting. This style of reporting, which I like to call total, unadulterated BS reporting, is a result of their mindless group-think adherence to the idiotic talking points of the Democratic Party and sundry liberal fascists’, and their gun-control fetish. As you can tell, my own cartoons would be a lot more wordy than Nate Beeler’s. 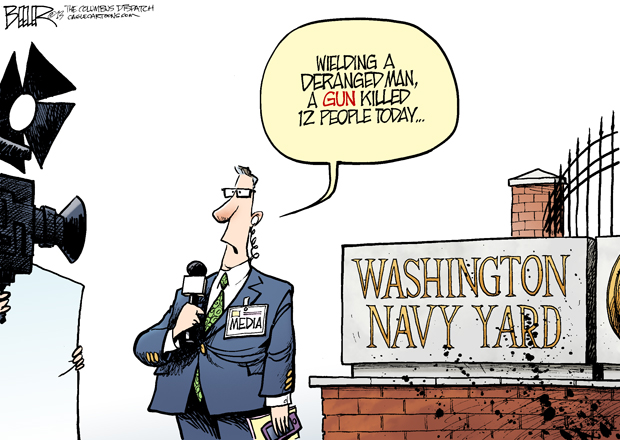 Damn that’s a funny cartoon! Now, I don’t want to turn this into a downer, but it’s dark humor. It’s funny because it’s an absolutely true depiction of the liberals and their media, and the logic portrayed here is so totally absurd. Logic dictates that guns don’t kill people, people kill people. Guns are not people, and yet liberals make out like guns are people too. They’re a little like PETA!

The funny bit (is it still funny, really?) includes the subversive notion that that liberals are now so heavily invested in this gun-control lunacy  —  politically and within the media  —  that simply in order to appear consistent and decisive, they now have to accept regularly appearing as idiots  —  just like in the life-like cartoon by Nate Beeler. Every time there’s a shooting, we’re off to the races   —  or the funny pages  —  again. Like the annoying TV ad that’s repeated way too often, liberals hope eventually people will buy their crap.

The problem may be history itself. Liberals and progressives can be credibly held to account for being partially responsible for the societal root cause of these tragedies, which we all know, whether liberals admit it or not (not), is mental health issues.

In the 1970s, liberals tackled this problem as they often do  — with pure emotion rather than reason and hard empirical or scientific facts.  It was entirely ill-conceived. It was an experiment. They closed mental health institutions, forcing the erstwhile institutionalized mentally ill to somehow magically blend into society, which would somehow deal with it. Somehow. Well it failed. That’s your hope ‘n change philosophy at work again.

It has resulted, I think, in homelessness, poverty, crime, drug abuse, family break-down, and more.

Their experimental feel-good policy on the mentally ill was another failed liberal experiment, using human lives as if they were lab rats or PETA’s sacred chickens. And yet liberals are still experimenting in other similar and potentially disastrous ways.

So this gun-control canard is to deflect from their massive, historic, and what is very much their liberal philosophy-rooted gaffe.

Instead, liberals including Barack Obama should be admitting that liberalism has proved to be an abject failure. That’s right, admit it, and move on. But no. They blame the shooter’s problem on the idiotic, unscientific idea that guns are going around wielding mentally-deranged individuals, and killing people. This, to maintain face, and gain power. That’s their ultimate objective.  Power over the people. A notably unarmed people.

Oh my sides ache with all the funny.  No not really. Wow. I bummed myself out! Or should I pass the buck and say liberals bummed me out?

For more on this, see my article from yesterday, The Problem: Gun Violence? Yeah, But Liberal Media Lies, Too. Here’s my BoldColors.net Facebook page meme for that one: 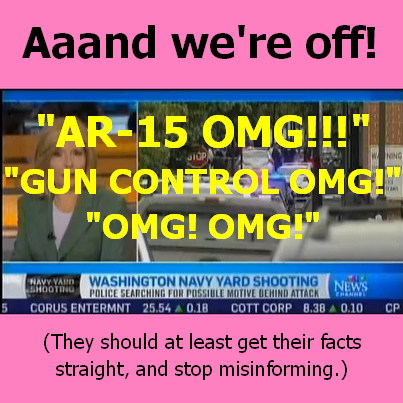