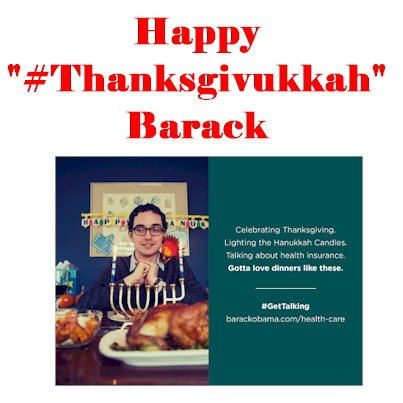 Happy Thanksgiving and Hanukkah. And of course, as is the annual tradition, remember to talk about Obamacare during your festivities! It’s what #Michack or #Barchelle wants!

I started this two weeks ago because I foresaw the result, and I’d love to continue basking in my prescience, but now the Barack has jumped the turkey, so I have to post it.

http://t.co/WaMGMUDkQ9 (OFA) is emailing me and all asking for feedback about "how easy it's been" to get insurance.

http://t.co/sSJMILX0cF's emails to me usually tout how much I need Obama. Latest: SUBJECT: "Joel, Obama needs you now."

They were both asking for “good news” stories about getting Obamacare. And as none were coming in…

…the bully takes to his bully pulpit.

Good news: The number of uninsured children in America is on the decline. Read more: http://t.co/hqQIu4jFj8 #Obamacare

And a lonely member of his regime  —  one of his sycophantic Sargent at arms, you might say  —  chimes in, post-MSNBC Obamagasm. Please help! <Puff>

.@davidaxelrod talking on @hardball_chris about millions who have benefitted from O'care. Ds need to get these stories out there.

Still nuttin’. So let’s try this!

"Billions of dollars' worth of good news." This chart shows the growth in health care costs is slowing: http://t.co/0tQK1VCaUp

And now nearly two weeks later, after asking even their own supporters for examples of the good news, and none having come in…

But wait! It’s just that the media (which the left owns) is hiding the Obamafacts! Yeah I know it’s weird but it could happen, guys! Thank God the extreme left-wing Media Matters smear machine took this brief time out from their phony, deceptive attempts at smearing Fox New, to attempt to smear all the other news media for not carrying Obama’s water to their satisfaction.

How print and broadcast media are hiding Obamacare's success in controlling costs. http://t.co/tkY65WbYKG

And again. Imagine a world in which to Media Matters, all of the media is to the right of Barack Obama. I think they call this Cuba!

Apparently, despite the combined efforts to find any “good news” by the Obama regime and its supporters’ crowd-sourcing via Twitter and their email lists with millions of names, and what you gotta know is a concerted effort by the liberal media hacks, they have found virtually nothing. Nothing!  So the regime and its interest groups have to keep pumping out increasingly lame propaganda on their own.

And yes, the family holidays like Thanksgiving and Christmas are the perfect time to talk politics  —  says the biggest divider in America’s history:

Parents: Turkey isn't the only thing to talk about at Thanksgiving this year. #GetTalking pic.twitter.com/f3mpGL3f9U

“#GetTalking.” Oh dear. Or oh turkey. By which I mean Obama.

Of course given that Michelle Obama is on that no meat health kick, I suppose they’ll be eating tofurkry for Thanksgiving. Oh did I exclude people with that “Thanksgiving” quip? Sorry!  As the Obamas apparently call it in hashtag form, in order to assure America that they are ever so trendy and PC and properly inclusive, “#Thanksgivukkah.”  No they really said that. Look!

Make sure everyone who sits down with you for #Thanksgivukkah dinner is covered. #GetTalking pic.twitter.com/EWZ3qUpEI1

But as far as “GetTalking” is concerned, ask John Nolte of Breitbart.com fame about that. Don’t risk talking about the O-word at Thanksgiving. Not at his house, anyway.

"Welcome! Happy Thanksgiving!" "Have you signed up for Ob–" *punch* "But I just–" *punch punch* "Can't we just– *punch punch punch*

Can’t wait for Christmas (or “holidays” as Obamatons call it). I’m looking for the new mash-up hashtag, #festivuskwanza. Lets #GetTalkin about that. 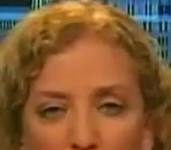