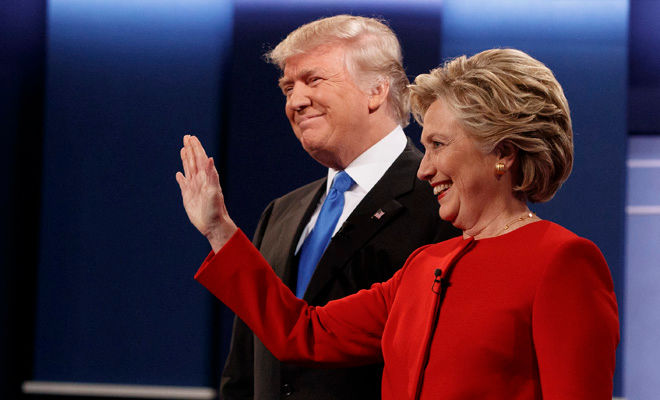 [dropcap]T[/dropcap]his fight between Americans in an increasingly divided America (and people in other countries too) about who’s worse: Hillary Clinton or Donald Trump — I’ve never experienced anything like it. I normally like a good battle between good candidates. This battle is not that. They’re both terrible candidates in their own ways, and arguments about it from both sides have been almost as bad. So it’s a relief when I find good ones.

Donald Trump is a boor and a clod. He trips over himself more than a two-year-old trying to walk in uncle’s big shoes. Just when you think Trump’s going to complete a sentence and make a good big point, he teeters off into some inane tangent about something almost completely unrelated, and you’re left hoping beyond hope that he quickly makes it back to his original point, which he doesn’t, not really, and he fails to land the punch just about every time. In debate, he comes excruciatingly close to landing a punch, and then miraculously reverses the right hook and sucks it back in by making a totally stupid remark that begs for the left-wing media to suckerpunch him instead.

We used to lament about Mitt Romney never bothering to land the punch on account of his graciousness or kindness — even though we all knew he had the intellectual fortitude and discipline to do it well. Mitt Romney looks like a prizefighter now.

So that’s bad. But Hillary Clinton? Worse by a magnitude of 666.

Aside from being so unlikable that I cringe even seeing her walk onto a stage or up to a mic, Hillary Clinton is factually lying, being utterly disingenuous, obfuscating, evading, robotically pumping out pre-tested, pre-written and overly-rehearsed lines over and over, and being generally intellectually dishonest with just about every single sentence she utters. And I believe she is corrupt to the core, as is the whole Clinton mob (I think of Frank and Claire Underwood, only the Clintons are even more grating and real-life criminal in my head), and much of the DNC.

Pace Barack Obama, Donald Trump built that crapload he’s carrying, all by himself with nobody’s help. Hillary Clinton, on the other hand, if I could borrow that awful, quintessentially liberal-leftist line from Obama (and this is not a compliment in the way I might quote, say, Winston Churchill) “she dint build that (sniff).” She gets lots of help.

So next, let’s go over the problems America is facing: I’ve read enough shortlists of problems the Obama/Clinton/liberal cabal have created for America to fill a football stadium (which is likely a lot emptier these days thanks to the Black Lives Matter football player/political protesters). But David Limbaugh throws the touchdown pass today with this inventory superdome. (Thus forcing this article over my own word limit — it’s not David’s fault, it’s ObamaClintonliberal’s fault):

We have a staggering national debt, a dangerously declining military and a runaway regulatory state that is suppressing our liberties, insulating government from accountability and helping to smother economic growth. We have onerous taxes on people who are still working (notwithstanding the malicious lie that the wealthy don’t pay their fair share), an exploding welfare state, a war on the Second Amendment and the rights of private gun owners, and a government-caused health insurance catastrophe — with liberal promises of more of the same. We have unprotected borders (which threatens jobs, national sovereignty and the integrity of democratic processes), a war on Christian religious liberties by militant secularists who deny they’re doing it and a sick, amoral culture supported by the openly valueless Democratic Party, which glorifies abortion as a quasi-religious right so important it must be subsidized by the federal government. We have politicized governmental entities — e.g., the IRS, Department of Justice, Environmental Protection Agency and Federal Communications Commission — and we are suffering ever-deteriorating race relations and a war on cops fomented and fueled by the president and his race-exploitive Democratic Party. We have proliferating Islamic terrorism accompanied by an administration that is in denial about it and sees more danger in generic extremism and conservative “bitter clingers” than it does in Islamic extremism.

And to David Limbaugh, liberals are the problem. Which means he’s exactly right, and is why he, like most of us, is straining to find the good in Trump.

To them [liberals], America is on the right course. They’ll tell you they want more jobs, for example, but they do everything in their power to keep that from happening — from minimum wage hikes to higher individual and corporate taxes to oppressive regulations to demonizing businesses, producers and entrepreneurs, who “didn’t build that.”

So who built that debacle? Part of the problem as David points out is the overt collusion we find between the liberal media, and the Clinton machine which includes the candidate, the DNC and all the party hacks. Landing the punch yet again — David Limbaugh starts and completes another word-limit-busting list (again, not his fault):

We see this collusion and its poison fruit everywhere we look, in the coordinated witch hunt against a phantom anti-Islam video to shield Hillary Clinton and the rest of the Obama administration from accountability for the terrorist attacks in Benghazi, in the White House, Department of Justice and FBI scheme to protect Clinton from prosecution for her destruction of emails, in the DNC’s nefarious orchestration of violence and bullying of women at rallies for Donald Trump — evidenced by the fact that the main operative of that enterprise visited the White House hundreds of times — in the DNC’s voter fraud operation, in Clinton’s admitting that her private positions differ from her public ones, in the pay-to-play scandals of the Clinton Foundation and the administration’s insulating it from investigation, in the administration’s politicizing its actions according to various “food groups,” such as “needy Latinos,” in Clinton’s lying about the threat of terrorists entering the United States among the refugees with whom she wants to flood this country, in the denigration of Catholics, in the delivery of debate questions to Clinton in advance, in the probable cover-up of Clinton’s health issues, in the White House plan to target “violent ideologies,” in liberals’ goal of resurrecting the so-called Fairness Doctrine to suppress conservative opinion on radio, in the Democrats’ refusal to enforce immigration laws, in the surrendering of our sovereignty to the United Nations, in the promotion of voter fraud by opposing voter ID laws with the cudgel of phony allegations of racism, in the political targeting of conservatives by the IRS, in the circumvention of the legislative branch through lawless executive orders, in the liberal media’s absurdly disproportionate contributions to Democratic politicians and in the media’s highlighting of allegations against Trump and blackout of allegations against Bill and Hillary Clinton.

It’s now up to us to “unbuild” what Hillary Clinton, the Clinton mob, the DNC, hacks, liberals generally, and the liberal media all built together.

…The right must fight back. There are two ways to do so. First, give to organizations like Prager U that have been victimized by the left. Second, turnabout is fair play – leftists must feel the pain of mutually assured destruction. This second tactic is something Republicans are always loathe to do, since it’s something with which we fundamentally disagree – but if the left isn’t made to understand that a polite society relies on a basic agreement between parties not to destroy one another based on political differences, they’ll continue to destroy the right while the right pays them to do so.

I suggest you copy and paste or bookmark this article so you can recount the inventory over the four years to come post-November 8. Most of the problems are going to grow in number and magnitude, and the inventory of points about the liberals’ own culpability is going to be reduced as it is ridiculed, deemed as “racist” or “homophobic” or “sexist” or “xenophobic” or some other “deplorable” term, or buried, covered up, and obfuscated as best the media and the Democrats can do (together) over the next four years.