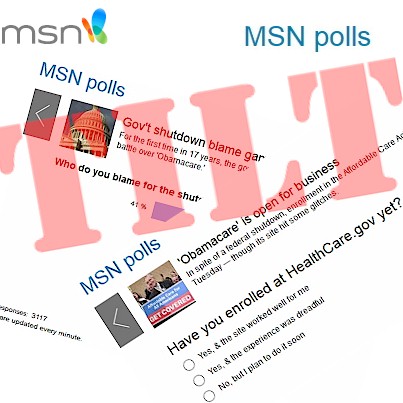 Thanks to weaselzippers.us for writing this up and catching my attention.  I grabbed my own screen captures because I could hardly believe my eyes. So these are up-to-date: 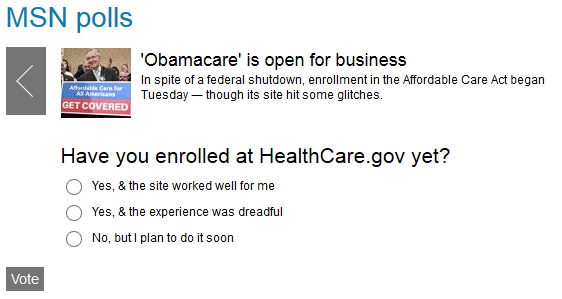 Maybe it’s #HarryReidsShutdown causing this abject polling bias at MSN.COM, but where are the negative options?  Here’s a couple of options:

No, I gave up because it was redonkulous,

No, & never will, because it’s lousy for me.

Do you think those options occurred to MSN.COM? Well of course they did. They chose not to include them. This isn’t merely an oversight, this is a media manipulation of the news, and of the popular culture or meme surrounding Obamascare. It’s a miniscule bit of social engineering.

It instantly reminded me of something it should not be reminding me of: today’s daily email from the blatantly, obviously, extremely, totally partisan “OFA,” or “Organizing For Action”   —  Barack Obama’s multi-million-dollar (IRS tax-exempt-status approved) mouthpiece, located at BarackObama.com.  Here’s how they closed that email to me this morning: 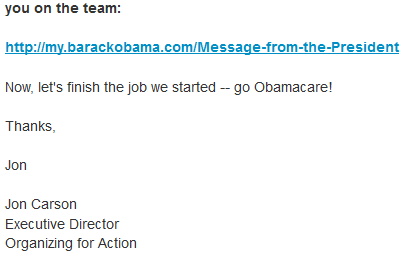 One little mistake, you say? No. It’s a very tiny example of the drip-by-drip liberal-left media bias at work.  And that’s not even the worst of today’s examples.

As if to prove they’re totally corrupt, this supposedly trustworthy news gathering service, which wants to shape your mind so badly it even seeks to have you make it your home page, they actually messed with the poll. Here a screenshot taken by 2AAdvocate prior to what you see above. You can see why I think they removed that answer: it doesn’t help them with their narrative. 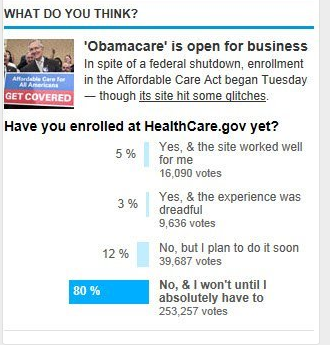 On another poll, while they were brave enough to offer as an option “I blame the president” (and you can see how poorly that turned out), I noticed that they didn’t name his party, as they did for the “House GOP.”  Also obviously missing is the I blame the House DEM option, and the I blame Harry Reid’s Democratic Party Senate option, which actually shares the blame with the (Democratic Party) president. Alas you don’t even have the option of blaming the Democratic Senate, let alone both the Democratic Senate and Democratic president Obama. You don’t have the option of blaming the actual blameworthy parties. Amazing.

Given how the blame is going, how long before they change this one? 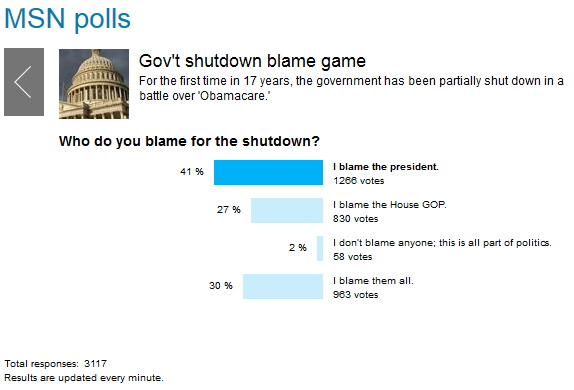