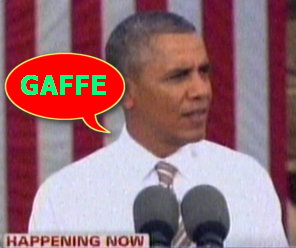 No seriously. He said this, this morning, in his childish rant about the government shutdown, entirely forgetting about his left-wing labor union base, in which striking  —  shutting down businesses just to get what

they want  —  is the modus operandi. He was off teleprompter, as if I had to tell you.

Obama said this, but it's not a gaffe, guys: "If a worker shut down a manufacturing plant until they got what they wanted, they'd be fired."

No media is reporting this as a gaffe, or even as the monumental blunder that it was. In fact, so far, I’ve been unable to find a clip in which that idiotic brain fart wasn’t edited out.

And by the way, what Obama lies and in the most extreme partisan attempt possible calls a “reckless,” “Republican,” shutdown, which Speaker John Boehner is doing only to appease “extremists”  —  is actually Barack Obama’s and Harry Reid’s and the Democrats’ shut down, which they cold end today.

Video upcoming (not from any mainstream media source, I can assure you).