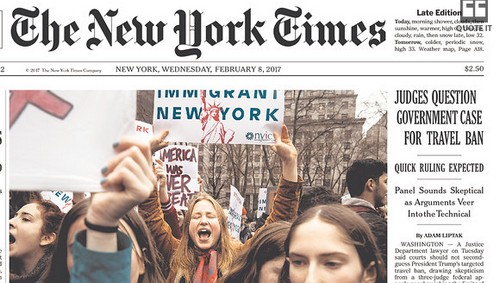 Here’s honest reporting from the Wall Street Journal on the appeal before the (very liberal) 9th Circuit Court regarding the Trump administration’s temporary immigration restrictions from seven countries, in which the judges grilled the lawyers from both sides:

And here’s dishonest reporting from the liberals’ New York Times division, in which they report that “JUDGES QUESTION GOVERNMENT CASE FOR TRAVEL BAN” — as in just the government’s case, not the opposition. They are trying to imply that the lawyer arguing against the Trump action was not questioned, which is a total lie, as his case was in fact challenged by the judges aggressively.

The dishonest USA Today went the same way: totally dishonest, in what I think is an obvious and ongoing effort by the likes of these newspapers to drive an anti-Trump agenda. The judges didn’t just “slam” the defence (The Trump administration), they slammed the opponents — the plaintiffs — too. I listened to the entire thing, so I know this is a lie: 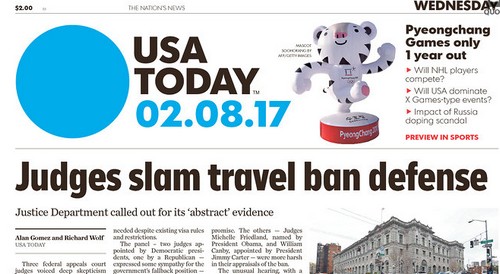 The Washington Post took a middle ground, surprisingly, since they rarely do anything but unfairly attack President Trump. The sub-headline reads “Appellate judges interrogate both sides on Trump travel order”. So that pits them against USA Today and the New York Times which said something really completely different. 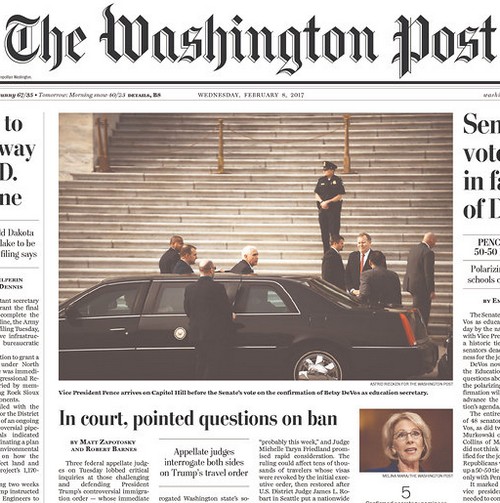 I think in Seattle or at least Washington state, where this court challenge started, the big newspaper there also took a fairer approach, perhaps knowing that their readers, being mostly local, are likely well attuned to the actual truth, and mindful of the taxpayer cash being thrown out the window to pursue their government’s anti-Trump political goals. So they had to go with honest: 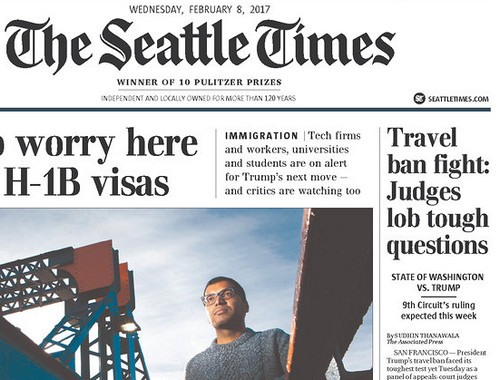 I guess if there’s a plus to all of this, it’s that there obviously isn’t overt coordination or a conspiracy between the various media outlets, as they are clearly telling quite different — almost opposite — stories. At least two of them are telling a lie as I see it. 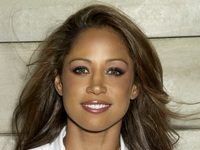 Jail for man-buns, peeing in bushes, and assorted other crap for Friday, January 13, 2017