It’s instructive to follow the liberal-left mainstream media and how they hit a political obstacle and reflexively, apparently without even thinking or reading what they’ve written in the past, reconfigure their political minds and do this weird, archaic, about-face  —  to defend the accused, when the accused is something like one of their own, politically.  I know that’s not how Super Mario Brothers’ Goomba does it, exactly, but it’s close.

This week we read about the allegations of the rape of a hotel worker, leveled against the head of the International Monetary Fund, Dominique Strauss-Kahn, the millionaire French hard-left socialist and wannabe leader of France’s Socialist Party and President of France, who was arrested after leaving his ultra-swanky $3,000 per night hotel room in New York.  He was apparently on “private business.”  And we see mainstream left-wing news media defending… the accused rapist.

Actually hang on, those opening paragraphs were instructive enough. It tells us plenty about the morass (mostly the ass-end) of the hypocrisy and intellectual vapidity surrounding socialism, and indeed the perfidy of the useful idiot media.   But what the hey, we’ve started the game now anyway.

Before knowing all of the facts of the Gabrielle Giffords shooting, the state-owned CBC’s taxpayer-paid Washington politics/news reporter and taxpayer-paid politics opinion writer/reporter/talker thingamajig, Neil Macdonald, was all over… Sarah Palin.   Instead of the shooter. That’s just part of what happens when you have a news media outfit with a political and cultural agenda.  To the point where it’s almost a religion, which I’d like to call Goombaism.

Not to go over old territory again, but that was just a small part of what became a historically disgraceful left-wing kumbaya or goombaya festival of hate and nefarious insinuation against totally innocent (and they knew it) Sarah Palin, in what is still held out to be an honest, fair and balanced news media  — run amok.

For his part, Neil Macdonald almost (almost is often, it seems to me, his cowardly modus operandi) explained on air and in writing,  as if reporting a news reporter’s fact to his and the CBC’s left-wing readers and listeners and such-like useful idiots, how not only Palin personally, but also her entire “tea party” compatriots, and while we’re at it, the

whole gamut of conservatives in America and perhaps even America in general (or as he dubbed them this week in his column, “vulgar Americans,” by which he means almost exclusively the “right-wingers,” I figure) had at least something to do with Gabrielle Giffords’ shooting, if only in promoting the “culture of guns” and “hate” (huh?), and putting political opponents in the political “crosshairs.”  Never mind that the CBC’s own politics show did and still does exactly, precisely, the same thing, by which I mean putting politicians  —  mostly Conservatives  —  in the crosshairs or to use their parlance, “The Firing Line.”  Literally, not figuratively; graphically, and in every which way identically to what Sarah Palin did.  But no, never mind facts. Never mind evidence. It’s a cheap-ass video game they’re playing.  With your taxpayer money.

The citizen-owned Sun News’ Brian Lilley summed-up one instance quite nicely in a column back in January, 2011:

…By the time I heard about the shooting of Congresswoman Gabrielle Giffords on Saturday I was already hearing that Sarah Palin had something to do with it even though Tucson, Arizona and Wasilla, Alaska are about 3,700 miles apart. This was also before we even knew much about Jared Loughner, the man now charged in the shooting.

In Canada I wasn’t surprised to see people jump to blame Palin. The suggestion had already been made in the American media and blaming Palin and company allowed Canada’s media to do three of its favourite things:

“She was a person whose face was on Sarah Palin’s Facebook page with a crosshair on her as one of the Democrats that should be targeted politically at least in the last election. The political environment in this country has grown more and more verbally violent I guess, and don’t forget that the Tea Party movement or Tea Partiers, far right wing demonstrators, were showing up at President Obama’s rallies with guns in the last couple of years, and the White House tolerated that because they didn’t want to pick a fight with the right wing.”

What Macdonald did there was take little bits of fact and spin them faster than a Democratic pundit facing off against Bill O’Reilly on Fox.

Time and again it was pointed out that Palin had “targeted” Giffords for defeat, that a site scope graphic was used to show which districts conservatives should aim at taking back. Of course both sides play that game and the Democrats had their own map using bulls eye symbols in stead of a site scope. It was their target list. …

Canadians of Macdonald’s ilk — and the CBC’s ilk — will eat it up as this smear pap is broadcast to them through the state-owned broadcast networks — deemed by some on the left as legitimate simply by virtue of it being state-owned instead of citizen-owned, in a quixotic adoration of all that is socialism (socialism=good; capitalism=bad!) taught to them by a liberal-left academia, and the media itself. And don’t forget he’s a hard news reporter, after all, in addition to also being paid to spew his political opinion. On a state-owned news media. He doesn’t forget. The state-owned media doesn’t forget that. And they hope you bear all that in mind (confusing as it is for a great many Canadians to separate hard news reporting and political opinion or “analysis”  —  by those exact same state media reporters), and that you buy it all, hook, line and intelligence sinker.

Today, we have hard news in front of us about an elitist, filthy rich socialist Frenchman, who has been arrested on charges of rape — a man who has had somewhat similar allegations leveled against him in the past, and who has an infamous reputation that would guide us to at least intelligently suspect the charges 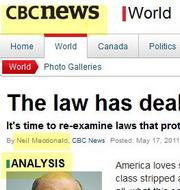 to be at least somewhat credible, unlike any of those against Sarah Palin, a woman who has never been charged or accused by the police of anything, ever.  And against a man about whom the police apparently have some substantial evidence including DNA evidence upon which to process their charges.  And Neil Macdonald rushes to the defense of… the charged rapist, fearing the damage to his reputation.

His headline at the CBC (News!) web site: “The law has dealt a great injustice to Strauss-Kahn”.

You see, the plot goes like this:  Sarah Palin is a good conservative. In other words, anathema to a Neil Macdonald or a CBC. “Reporters” and state-owned media Goombas from Canada can blame her and mock her and slam her all day long for anything damn thing, and they do.  Spelling mistakes, typos, misspoken words, writing on her hand, being conservative, being pro-life, being a Christian;  any innuendo or insinuation or charge against her will do, and absolutely no hard or relevant “evidence” or even “context” is needed, just opinions.  Or “analysis” as they pretend it to be.  As long as the ultimate result smears the crap out of her, and demeans her, and reduces her standing in the community, ruins her reputation, destroys her politically (and as collateral damage, hopefully that of her whole political movement!), cast aspersions on all her good works, all her noble, patriotic efforts, all her good life and honesty and charity, wrecks her family (see this Macdonald tribute), and cast aspersions so that all the millions of people who now respect her as a normal human being who is simply trying to change American for what she sees as the better, stop respecting her at all.  The “injustice” and ruination of reputation which he is so aghast about in the case of the socialist rapist, means squat, in this instance.  If I understand correctly.  And I do.  Which is why I don’t watch CBC comedies.

But you see the Frenchman being charged today by police — unlike Sarah Palin — is a hard left socialist who is also the elitist head of an elitist world political power organization which bails out nations with taxpayer dollars. Or to put it another way, he is a wet dream for progressive Goombas like the state-owned media and Goombas like Neil Macdonald.

So this week, the hard left — the state-owned, socialism-reliant CBC and reporters like Neil Macdonald — hit an obstacle and immediately turn the other way.

His concluding remarks regarding the Frenchman socialist being charged with rape?

“But would it hurt, in cases of rape or sexual assault, to keep the name of the accused as well as the accuser confidential, at least until there’s a guilty verdict?”