The lamestream media made it a focus of their agenda to portray President George W. Bush as an internationally hated pariah. An idiot.  They did it with a vengeance. Literally. They maligned him as forcefully, as often, as blatantly as possible. In full, bold colors. They never missed an opportunity to publish photos like the one here  —  except with Bush’s face on it instead  —  for days on end. Photos like this  —  except with Bush’s face on it instead  —  were and are exhibitions of hate. But the media once relished in them.

So where’s this one today? I mean besides practically hiding on news aggregator Yahoo.com’s photo site if you search for it hard enough. It is available to all the news media, from Reuters, as displayed here. So where is it? Nowhere. 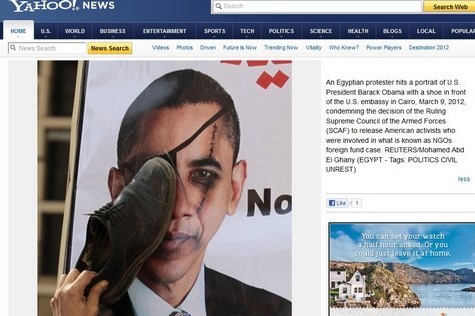 The fact that this photo emanates from Egypt  —  today  —  is half the story… which of course they are not reporting. You’ll remember that Egypt is where Obama, early in his presidency, gave what was touted and framed by the media as a ground-breaking peace with the world, love America again speech. The speech was in fact called “A New Beginning.” The speech was designed to end depictions of the world as one which came to hate America, what with those awful photos and images exactly like the one we see above. The much ballyhooed speech now even has its own practically rhapsodic Wikipedia page, which reads like a love letter to the world written by a left-winger who just left another Obama love-fest at, for example, MSNBC).

The fact that the speech was so evidently such an utter failure is, in and of itself, news. But the media doesn’t report on Obama’s many failures. An Obama film documentarian  —  a supposed professional  —  said yesterday on CNN, when asked to speak of Obama’s faults (because none were presented in the “documentary”), that he didn’t have any. None.  He replied that “the negative for me was that there were too many accomplishments.”

At the time, the media reported on the “A New Beginning” lecture to Egyptians and America as having worked marvelously well. Sure to change the global perception of America as “ruined” by the Bush years. But they don’t report pictures and stories around them like the one above.

Now, you remember the Bush years. Just to emboss the idea into your minds, to reinforce their reporting through the year, at the end of every year, for eight years, the media would use the opportunity to frame the year-gone-by as yet another year in which the world hated the U.S president  —  specifically George W. Bush. News reporters and supposedly above-the-fray anchors blithely “reported” on episodes, or used episodic photos like this one  —  only with Bush in place of Obama  —  with a noticeable smirk on their face, instead of a look of disgust or lament. That occasional smirk or look of glee helped give it away.

Today, they obscure, whitewash, obfuscate, or completely neglect to cover stores in order to defend and cover for the utter failure of their man  —  the man they invested all their journalistic capital in and worked tirelessly to elect. They staked all their credibility on him.  The man for whom they insouciantly threw all pretense of objectivity out the window:  Barack Obama.

Today, every day, we are now reminded of what a dangerous place news media has become.  The once proud, objective news media was an honored profession, not long ago, but it has quickly become an increasingly, hideously biased, completely untrustworthy, and in many cases downright corrupt cesspool of lies and omissions and left-wing propaganda. They are literally campaigning for the progressive left instead of earnestly reporting the news.

So we have to. Do not trust the liberal media.