The “Reverend” (huge air quotes) Al Sharpton is misnamed. His name should be Irreverence Al Sharpton. I’ll just go ahead and call him Sharpton from now on.

Sharpton put up a few bar charts today on his audibly and intellectually intolerable MSNBC show, including this one: 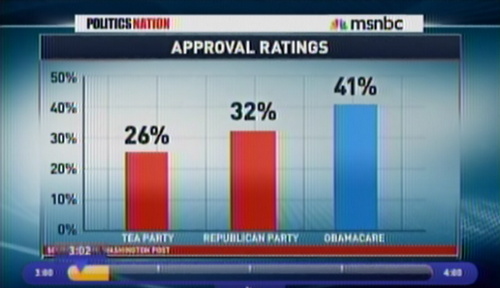 It’s an Obamanation of misinformation.

The poll, conducted by the liberals’ Washington Post division, asked 40 questions, most of which proved the Democrats, Obama, and Obamacare are held in pretty low esteem by the American people as a general matter. The chart Sharpton put up represents the best illusion that Sharpton could come up with from the myriad options. But it’s not informative or intellectually honest.

And incidentally, I wonder if since 26% support the tea party, and 32% support the GOP, that doesn’t mean 58% would be voting Republican today, assuming there’s no other logical place for the tea party vote to go.  Possibly not, but I do wonder if disenchantment with the Republicans as reflected in poll numbers is a result of folks who adhere more to the tea party vision than that of the establishment Republicans, and have made that intellectual split in their minds. They will hold their breath and vote Republican for better or worse.

Sharpton could be ignorant, or simply in a hurry and misinterpreted the poll result. But actually I think he’s simply resorting to malice.

While Obamacare is more popular (though it has only a minority of American support) than the tea party, the tea party isn’t a massive,  extremely well-funded (to the tune of hundreds of millions of taxpayer dollars), mandated-by-law, government operation which has been advertised ad nauseam, and promoted out the ying-yang by Obama and his bully pulpit. Rather, it’s just  a loose and purposely unorganized and un-led movement of free citizens, with no “free” products to give away at taxpayer expense, no adoring media to whitewash all its mistakes (quite the contrary), or Hollywood liberal boosterism written into their stupid TV shows (again, quite the contrary). Comparing the two entities betrays child-like intelligence. And it is an insult to viewers, whom Sharpton obviously utterly disrespects.

And the GOP popularity? The GOP currently has no presidential candidate for voters to glom onto, and therefore nobody to identify with, nor anyone with the prestige of the office of the President of the United States (or control of the IRS) as Obama does. And they have been (maliciously, wrongly) blamed by nearly all of the liberal media for the government shutdown and the budget battle  —  so it’s entirely understandable that they have a dearth of support. All that will change, and then they don’t have all that big a hill to climb, according to the polls.

Speaking of Barack Obama  — yes, so sorry Sharpton, but I will go there. Even if we buy that idiocy about Obamacare being more supported than an intangible  —  the tea party movement  —  and a GOP at its worst  —  does Obama get more supporters than non-supporters? We know how important that is to Sharpton. So here’s why Sharpton didn’t put up that chart: because 49% disapprove of the job Obama’s doing, while only 48% approve in that poll. It’s awful when the president is disapproved by more Americans than approve. That’s really the bigger story, here. A president with the kind of massive media and liberal Hollywood and labor union and Wall Street and trial lawyer support that he gets, and the presidential bully pulpit  —  is still disapproved by the country?  Wow.

It’s a good thing Sharpton didn’t bother to read the latest Gallup poll, which showed Obama at George W. Bush levels of popularity (42% approval, with 52% disapproving in their latest weekly poll). Here  —  I’ll make the chart for you, Sharpton. You can borrow it for tomorrow’s show. 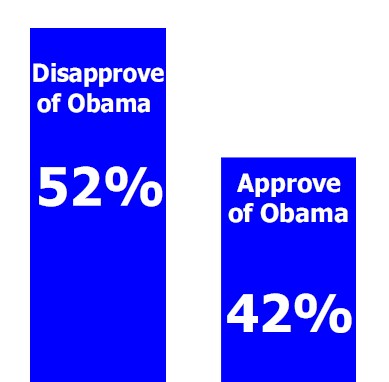 But it’s even uglier:

Q: Do you think things in this country (are generally going in the right direction) or do you feel things (have gotten pretty seriously off on the wrong track)?

68% say wrong track. Only a scarce 28% of the country think that Barack Obama and the Democrats are taking America in the right direction. That’s a horror story.

Here’s some other questions asked in the poll, and their answers, which Sharpton and the Republican hate-team at MSNBC purposely didn’t show you:

Q: Do you approve or disapprove of the way Obama is handling Implementation of the new health care law?

Q: Overall, do you support or oppose the federal law making changes to the health care system?

Even after countless millions spent on all that marketing and PR? That’s remarkably bad. That’s a big story. A real story.

Q: There have been problems with the website set up for uninsured people to sign up for health insurance. Do you think this is (an isolated incident) or do you think it’s (a sign of broader problems in implementing the health care law)?

Oh dear. Come on Sharpton, put up that graph.

With regard to the question of the tea party, Sharpton displays the answer to the one question “Overall, do you have a favorable or unfavorable impression of the political movement known as the tea party?” He featured that one because it had the lowest number. But there was another almost identical question asked:

I think it’s remarkable, especially given the coverage that the liberal-left Obamacult media has been giving the tea party, and the slamming of them and the insults lobbed at them by President Obama in cutting hyper-partisan speech after hyper-partisan speech, that well over a third of the American populace supports the tea party. And hey  —  more people support the tea party than think the country is going in the right direction. Now there’s a chart for Sharpton if only he’d come out from under his desk.

Sharpton chose only to pretend that Obamacare is more “supported ” than the tea party or the GOP, individually. Hideous.

Good thing he’s got that “Reverend” (huge air quotes) gig to fall back on because he’s a 100% failure at his current job.