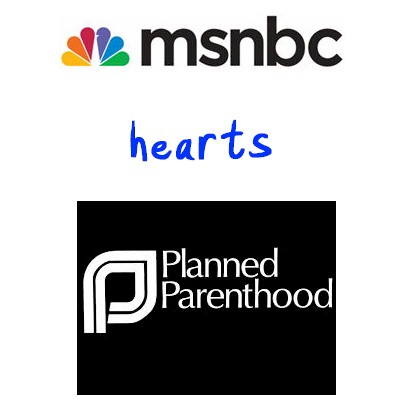 A cable news channel, MSNBC, retweets a commendation from the world’s biggest abortion mill, Planned Parenthood.  That in and of itself

is indicative of horrendously faulty editorial judgement, coming as it does from the main Twitter account of what is supposedly a news organization.

But it’s worse: this retweet comes as a result of an MSNBC-organized a pro-abortion question-and-answer forum on its own MSNBC.com “news” site, on the occasion of the anniversary of the atrocious Roe vs Wade decision. It features a spokeswoman from none other than the abortion-advocacy group, Planned Parenthood. And features exactly nobody from any of the growing throngs of pro-life organizations.

Thank you, @irin, for answering our questions on #Roe41, abortion rights, and access! Read her helpful answers: http://t.co/grkt8GNifK

This isn’t news reporting. This is a channel pretending to be a news channel. They are a left-wing advocate for abortion. You will not find Fox News Channel or CNN or ABC or CBS or the Washington Post or even the left-wing New York Times retweeting anything pro or anti-abortion  —  much less hosting an abortion-advocacy Q&A on any of their respective websites.

And it’s a disgrace.

The pro-abortion-based sisterly love goes further. At the MSNBC website, when you go to visit the pro-abortion Q&A, the banner and post atop the chit-chat reads like this, below, meaning their main goal is not to “inform” their audience  —  it is really just to advance the far-left’s pro-abortion cause and use the opportunity to raise cash for it: 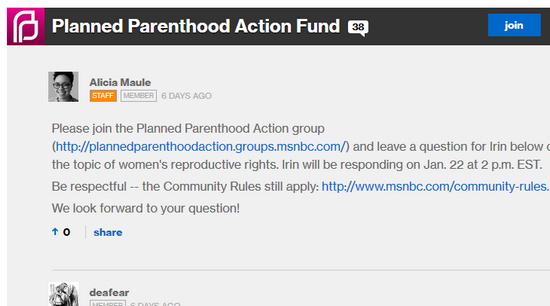 Apparently MSNBC gives space to organizations like this for their advocacy. When you click on the banner above, you get this MSNBC groups name-plate, in which the abortion advocacy group Planned Parenthood lists their interests, including a few of MSNBC’s left-wing advocacy shows hosted by extreme left-wingers, at least one of which is an avowed socialist. 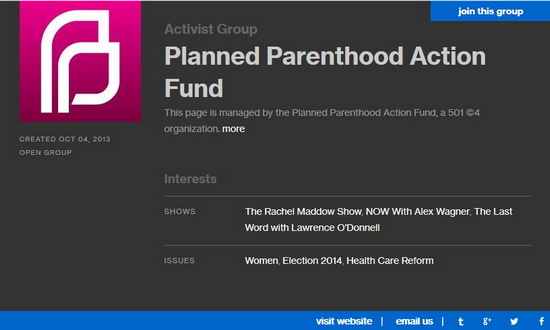 Much like Move-On.org and Media Matters, they are rabidly anti-conservative, anti capitalism, anti-gun, anti-traditional marriage (and possibly traditional anything). And exactly like all immature left-wingers who are absent of plausible arguments, they are rabidly anti-Fox News Channel. This is because Fox News is tolerant of conservative viewpoints in their news programs, and they have conservatives hosting their analysis/opinion programming. MSNBC is wildly intolerant of that kind of free speech. Thus MSNBC has another group using the infantile “Faux News” moniker like this, as well:

A small reminder here: MSNBC is a national news organization which expects you to get the news and new analysis from them and to take them seriously. And what’s worse: some people do, although Fox News Channel has over twice the viewership of MSNBC and CNN.

I’d be embarrassed if I worked for NBC in any capacity.

I’ll use this opportunity to remind everyone that abortion is the most disgusting, must egregious thing ever thought of by humans. And that liberals, Democrats, socialists, progressives  —  the left  —  are in favor of abortion, including even late-term abortions. But it’s progressive! Their love of abortion even includes, as Barack Obama’s does, the snuffing-out of the life of babies born  —  breathing, moving…  —  during live birth abortions.

And they can all live with that.