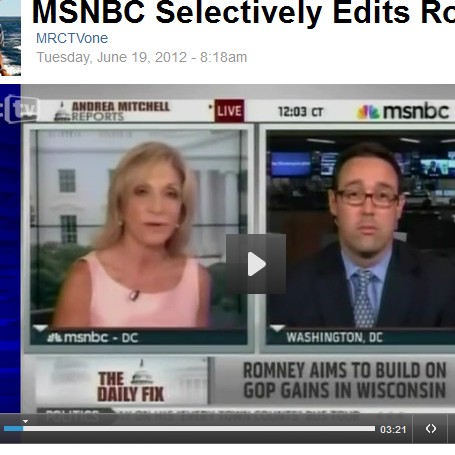 You thought this kind of crap under the pretense of “news” ended with the downfall of the disgraced CBS “News” and anti-conservative advocate anchor Dan Rather? Think again. Check out this prime example of the similarly smug NBC “News” anchor Andrea Mitchell and what I think amounts to an outright lie. (Yet the Left’s media is still feigning outrage and manufacturing a journalistic scandal and professionally bashing that reporter from a conservative news outlet for daring to shout out a question before the anointed One had completely finished his sacred speech… forgetting their hysterical laughs at President George W. Bush when a middle-eastern nutbar “journalist” threw a shoe at him…).

MRC.org headlines this video “MSNBC Selectively Edits Romney Speech For Laughs” but really, the word “laughs” should be replaced by “lies.”

This smug, arrogantly contrived effort by the left-wing news industrial complex to falsely discredit and malign and disparage and defame conservatives (Palin, Bush, you name ’em): I call it perfidy. They should be laughed right out of business. Oh wait: they already are.

After NBC’s Andrea Mitchell was caught trying to smear Mitt Romney with a deceptively-edited video, Politico reports that Mitchell plans to address the furor she caused on her show today.

MSNBC’s Andrea Mitchell will address her program’s decision to run edited footage from a Mitt Romney campaign stop that mischaracterized his statements and set off a firestorm of criticism on the right.

“Andrea will address this on her MSNBC show today at 1p eastern,” a network spokesperson told POLITICO.

Mitchell owes a full retraction and an apology. Also implicated is The Fix’s Chris Cillizza, who sat by and laughed as Mitchell presented the misleading clip. Cillizza also owes a clarification.