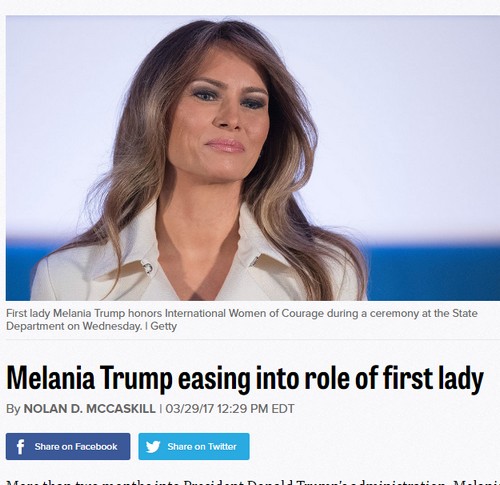 [dropcap]A[/dropcap]side from the problem that most “news” media outlets present hardly any actual news, and instead shove almost entirely left-wing, progressive, liberal, socialist, or downright communist opinion in your face every day (or fake news), my post today exemplifies another big part of the problem with the “news” media.

By the way I don’t do this to help the mainstream “news” media. I gave that up a long time ago. I do this to mock them. In my early days of political and media critical analysis, I actually did try to help. They failed to heed my advice. Now they’re failing even worse, and I relish their demise.

Note that the two stories I present here today are, ostensibly, “news” stories, so, if we are to take journalists at their word (don’t), this means that they are based on research and presentation of the facts, and on science (they so luvs the science), and so on.

But the two narratives presented here are at odds with each other. How could that be, if they are applying their ever-so strict journalistic standards of truth? They can’t both be right — and spoiler alert: they aren’t. (Also note that they can, however, both be wrong, and they almost always are.)

The first one hails from the National Post, Canada’s even more liberal answer to USA Today — or something (even they don’t know what they are so don’t expect me to). The byline is Washinton Post, so they didn’t even write it — they bought the story from the obsessively and now actually ridiculously Trump-hating, Trump-bashing Washington Post. Interestingly, the Washington Post original is posted in their “Style” section along with movie reviews and arts reviews, as the fluff piece that it actually is; the NatPo proudly displays it as a “news” piece in their totally hard-news “World” section.

(And by way of example regarding how I might have tried to help newspapers not fail so badly, the kind of advice I’d offer is: don’t buy an anti-Trump fake news drive-by smear story or hit-job from a clearly left-wing Trump-hating newspaper, unless you want to be seen as equally left-wing and Trump-hating (and hey guess what? They do) — and as another fake new outlet. And I’d advise them that such a editorial or business decision was folly, and counter to the journalistic principles to which they are obliged to adhere. (And they wouldn’t give a crap what I had to say).

So here we are. 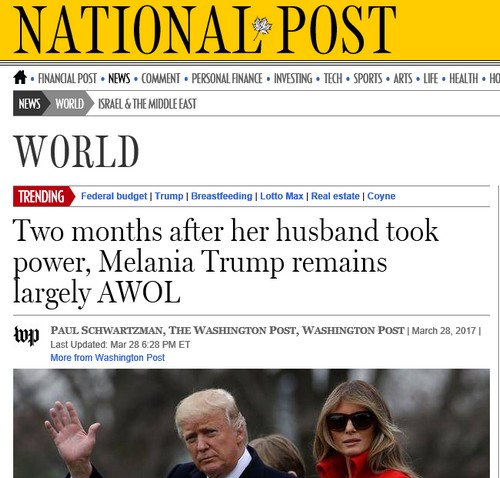 The article goes right ahead and admits that notwithstanding the whole “AWOL” angle, she’s at home with their young son in New York until the school year ends. That is, by definition, not “AWOL.” So “AWOL” my ass. But let’s not screw around. The National Post and the Washington Post know this very well. They’re just writing smeary, sneering, anti-Trump propaganda, here. It’s not “news.” It’s not even based on truth. It’s bullshit.

How could this be? I thought she was “AWOL!” The Politico reporter seemed to have managed to find her and quote her and he wrote a pretty fair and straight-up news story about Mrs. Trump’s various outings and goings on these days. And let’s remind ourselves that Politico is no right-wing media source. They’re as left-wing as most of them. So three cheers for (for once) not doing a Trump hit piece. (And now back to their regular programing with, for example, “The best of late-night TV: Trump repeals the environment”).

The lesson here is that when you abridge the truth, or outright lie as a “news” source, you’re going to make a total ass of yourselves and lose the people’s trust. Most people with the intelligence of a frying pan would know this.

Among other things this speaks to the value of reading more than one source — like maybe ten — to get an semblance of where the truth lies; but really, no matter how many sources you read these days, even if you can sort it out, you’re rarely if ever getting “truth” or “facts” or “science,” you’re getting mostly left-wing opinion and propaganda and fake news from these “reporters.” And it’s mostly crap.

And they know how we the people feel about it, but don’t even care. Look: same day, same news source:

03/29/17 11:21 AM EDTA majority of Americans believe traditional media outlets publish fake news reports, and Republicans are more likely to believe that fake news is being pushed to advance an agenda, according to a Monmouth University poll released Wednesday.

The poll, which was conducted by phone during the first week of March, found that 80 percent of respondents believed online news sources reported fake news either regularly or occasionally. Fifty-four percent of respondents, including a majority of Republicans, independents and Democrats, said that fake news reports online were published on purpose in order to advance a specific agenda,

At least they reported it. 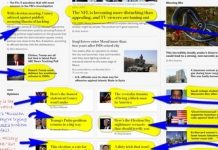