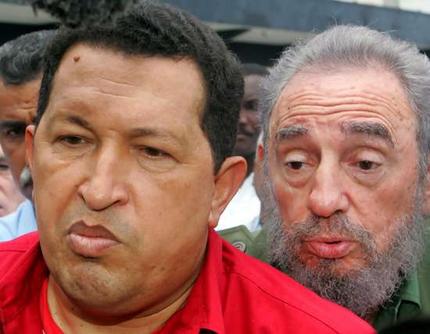 Yesterday, Charles Krauthammer wrote another of the several great, easy, succinct rebukes of Obamacare and President Obama’s arrogative takeover of the control of America’s privately-owned health insurance companies. (Our Ann Coulter wrote one too, right here). Krauthammer makes the spot-on comparison with Hugo Chavez’s Venezuela and Chavez’s assumption of power over once private Venezuelan (and American, for that matter) companies that didn’t toe to Chavez’s socialist plans to (let’s use Obama’s own words as he applied it to America) “fundamentally transform” Venezuela into another socialist state.

The Obamacare Trifecta
Where is the opposition’s argument against government health-care control?

… A brilliant sleight of hand. But let’s for a moment accept the president on his own terms. Let’s accept his contention that this “accommodation” is a real shift of responsibility to the insurer. Has anyone considered the import of this new mandate? The president of the United States has just ordered private companies to give away for free a service that his own health and human services secretary has repeatedly called a major financial burden.

On what authority? Where does it say that the president can unilaterally order a private company to provide an allegedly free-standing service at no cost to certain select beneficiaries?

This is government by presidential fiat. In Venezuela, that’s done all the time. Perhaps we should call Obama’s “accommodation” Presidential Decree No. 1.

First, its assault on the free exercise of religion. …

… Under Obamacare, the state treats private insurers the way it does government-regulated monopolies and utilities. It determines everything of importance. Insurers, by definition, set premiums according to risk. Not anymore. The risk ratios (for age, gender, smoking, etc.) are decreed by Washington. This is nationalization in all but name. The insurer is turned into a middleman, subject to state control — and presidential whim. …

When I think of the quick work of Obama and his Democrats in Congress over the past three short years, I wonder if in fact Obama isn’t making faster progress toward his “transformation of America” than Chavez, who has been at it for far more years. The check-off list is extensive: Obama’s de facto takeover over a wide swath of the course of many businesses spanning several industries through such federal agencies as the EPA, his National Labor Relations Board’s legal meddling in companies like Boeing and their attempts to set up shop in right-to-work states (in America rather than China, but no matter!), his payoffs and horrible “investments” (using taxpayer money) to so-called “green” companies, most of whose principals were actually found to be donors to his election campaign (Solyndra, for but one example), the Obama administration’s direct takeover of General Motors and similar action with Chrysler, and now the ongoing “health care” takeover of a sixth of the entire U.S. economy… the list goes on.

But Krauthammer quietly adds, at the end, the real, pertinent question of the day, which adds credibility to exactly why this web site was named BoldColors.net: where are the loud, clear voices of discontent over this takeover, and the advancement of cogent arguments for the traditional, conservative, American way?

Where are the Republicans and their arguments against this?

Where are the conservatives?