Home Bold Blog Obama has struggled like an army vet who was nearly killed in... 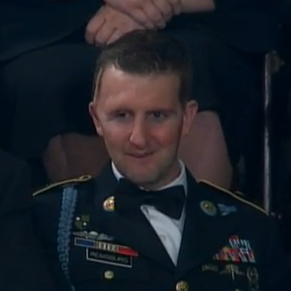 In case you didn’t know, 30-year-old Sgt. First Class Cory Remsburg is a heroic veteran of both the Iraq and Afghanistan wars. He was nearly killed by a roadside bomb in Kandahar, Afghanistan.  Barack Obama rightly honored him in last night’s State of the Union.

Some totally objective tweeps who are experts in objectively reporting politics then made the story clear for us with their expert analysis. Like Mark Murray.

On what planet? MT @mmurraypolitics: … it also was a story about Obama. Nothing has ever come easy

Maybe Mark Murray is president of the Obama Cult?

Perhaps the reporter is just an ass. Or an ass kisser. I don’t know. We should ask.

Here’s some much better comparative analysis than that which Mark Murray made:

.@jonfavs Remsburg had 10 deployments, Obama took 10 mulligans at a golf course in Hawaii. The similarities are uncanny. @mmurraypolitics

We should consider his mental state:

Delusional, thy name is @mmurraypolitics https://t.co/lXFAnanpwj There's hero worship, and then there's this. He's a "journalist!" #perverse

@mmurraypolitics I don't know that I'd compare running against Alan Keyes to everything Cory Remsburg has endured protecting all of us.

And it went on like this. Clearly, his tweet was hideous, and if its reception in the twitterverse is any indication, it was not well received.

I wonder why people have stopped trusting the liberal news media.