Could the new budget 2012 fight make matters even worse for President Obama? Well yes they could. Or at least they could if Republicans and conservatives don’t let Obama get away with framing the debate as he has already begun to do  —  mendaciously making out like the excellent Paul Ryan Republican proposal “sells out seniors” (it doesn’t) for the sake of “giving tax cuts” to “billionaires,” for example.  And it “kills Medicare” in order to give tax breaks to “the big banks” and “Wall Street” (it doesn’t).

It’s specious.  It’s demagoguery. It’s class warfare.  And as the skilled politicians he and his team are, they have crafted the verbiage very well, knowing how well it sells to a dumb, obsequious Obama-mania media, and how how difficult it may be for Republicans to stick-handle around it and explain it honestly, out in middle America, against that Presidential bully pulpit and the mass media forces working against them.

However, maybe middle America is prepared to at least lend an open mind, having already figured much of the Obama mindset out:  Obama, already at Gallup poll lows this week (41% approve, 50% disapprove —  see Obama Job Approval at 41%, Tying His Low), is nearing the lows recorded in Rasmussen’s daily approval tracking, today at -18%.  This, after the budget 2011 fiasco, and Obama’s hideous Republican-slamming campaign/budget 2012 speech. 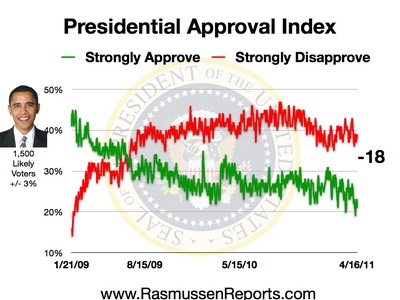 President Obama is hitting the road in the upcoming weeks to sell his demagoguery.  Things could go bad very quickly for him if Americans cotton on to his mendacity and crass political gamesmanship, and his putting himself and his left-wing agenda ahead of America’s needs. But if he succeeds in selling his fallacies to the public, with what we know will be the very able and eager and willing help of the mainstream media, things could start to go very badly for Republicans, and it could be an uphill battle for them.  It’s imperative that Republicans not let Obama and his sales team get away with framing the debate as they have.