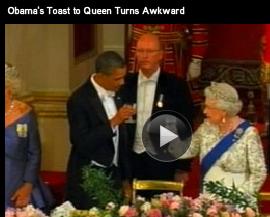 Not to point out gaffes like the media all did every single time President Bush ever misspoke or coughed or smiled crookedly or tilted his head wrong, or anything.  But this one by President Obama during the toast to the Queen really takes the cake.  Which is, I suppose, partially why the media almost universally did not cover it.  The other reason being that they are Obama suck-ups, carry his water, whitewash his gaffes, and generally protect him to the enth degree all day long.  And to the extent they did cover this, it was sheepishly at best.  And it was couched in the notion that the president was simply improperly briefed by a moron on proper etiquette and protocol (as opposed to he himself being bereft of proper etiquette and protocol or, you know, class).

Let’s watch in amusement as President Obama does it completely wrong. And how graciously the Royals and, well, every single person in the room besides him, is gracious enough  —  and knows the basic rules well enough  —   to ignore the blunderer-in-chief’s embarrassing goof-up.

Here’s the clue to toasting the Queen: don’t stand, ask everybody to raise their glasses in a toast to the Queen, and then continue your speech, when the Royal band is cued to begin playing God Save the Queen on the words “to the queen,” (and they did, and he carried on regardless).