“Brace yourself.” So begins the shocking, dour, and now daily admonition from Barack Obama’s  now even more alarmist “Obama For America,” um, community organization (now re-branded as a tax-exempt “Organizing for Action,” to take advantage of millions in donations from the wealthiest people in the world and in return, provide them with the ear of his regime. Read this excellent WSJ piece about that).

This latest OMG!!! FREAK OUT!!! email (and plea for my money) is from the guy who names himself “Messina.” This “Messina” is actually Jim Messina, a close, top personal Obama aid and campaign worker (yes I know, it’s February, after the election), trying to sound cool, I guess.

It struck me as familiar to the missive from the Obama talking pointers at Washington’s Total Freak Out Central, or WTFOC, a day earlier.

“Prepare yourself.”  That’s how yesterday’s email  —  this one from Stephanie Cutter (who dubs herself “Stephanie”) began hers.

Tomorrow I expect something along the lines of “Achtung!”

“Stephanie” went on informing me that Friday is the “final deadline for congressional Republicans to stop disastrous automatic spending cuts (known as the “sequester”) that will hurt everyday Americans — including you.”

“Messina” told me today that “if Republicans don’t act by tomorrow, we’re going to be hit by a series of devastating, automatic budget cuts called the sequester.”

Yesterday Stephie went with this line: “These budget cuts will take a sledgehammer to the budget…”

Messina prefers “It’s a sledgehammer to the budget,” and adds “our economy, and millions of Americans across the country.”

Stephanie on explaining why Republicans don’t want to raise taxes again: as if you didn’t know by now, it is because of the evil that is otherwise known as success to those of us in the sane, un-envious set.  “Because to do so, they’d have to close tax loopholes for millionaires and billionaires, oil companies, vacation homes, and private jet owners. I’m not kidding.”

“Messina” went with “So far, congressional Republicans are refusing to compromise — all because they don’t want to close tax loopholes for millionaires, billionaires, vacation homes, and corporate jets. Seriously.”

Except “Messina” (a) forgot “oil companies,” and changed up “private jet owners” with “corporate jet owners” and (b) is not to be taken seriously. At all.

And, as they both went on, if Republicans in congress don’t act (to the exclusion of Democrats and moreover, the president Obama  —  apparently having finally acknowledged that Obama is inept  —  so weak, and so, lame as to not even be capable of leadership in this regard —  something about which we agree wholeheartedly), then there are “consequences.” So says “Stephanie.”

They both list the identical (mostly false or at best, intellectually entirely dishonest) consequences. 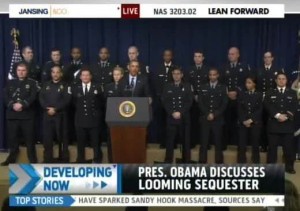 As usual, they deploy the “Washington Monument” appeal to the idiot. All of the “consequences” amazingly involve only old people, children, first responders, teachers, and women. I understand Obama will attempt a takeover of the puppy industry so that moving forward, they can also suggest that “puppies are in danger  —  real danger  —  because of Republicans and millionaires and billionaires and corporate/private jet owners, and possibly oil companies.”

P.S. I own no corporate or even private jet, I’m not a billionaire, and I’m not an oil company.