Home Bold Blog Paul Ryan speaks conservative, in bold colors. We like him.

I’ve spoken highly of Paul Ryan for ages. It’s easy. He speaks his message of good conservative values in strong, bold colors. He’s smart. He knows his stuff. So obviously we like Paul Ryan as Mitt Romney’s VP pick.

Paul Ryan has always been one of my favorites as a choice for Romney’s or anybody’s VP pick. I hope he uses his experience to groom himself for a presidential run.

Nobody knows the budget better than Paul Ryan. Nobody. And as a team, Romney and Ryan are just the ticket with (finally) the much-needed clear, well-thought-out, freedom and capitalism-based answers and direction that Americans and the world need so badly today  from Washington. The choice of Ryan means that this ticket is all about fixing America and relieving it from its Obama-nurtured and increasingly dismal progressive morass, and rid the world of the Obama regime’s lack of leadership on the economy, and America’s wrong direction. Finally.

Today the Left is apoplectic. It is literally the end of the world for them. Don’t take my word for it. Simply listen to them as they, with red faces and clenched fists, rail against this Ryan pick, and pretend it’s (a) the end of the world (and of course their talking point is “it’s the end of Medicare as we know it”), and (b) it spells the end of Romney’s chances of winning. (No, they cannot address that logical contradiction. No, don’t worry, the media will not ask them to.)

Therefore, the dour liberal/progressives/socialists/fascists of the left will make every attempt to strike him down, as they tried but failed to do did to Sarah Palin. They will attack his character, and naturally also his good family, as they did Palin’s. They will make up BS stories, they will repeat them over and over no matter the factual argument we and honest  reporters confront them with. They will mischaracterize him at every turn. They will lie, They will dishonestly take what’s he’s said out of context. They will create false memes based on nothing but ether and false rumor (hi Senator Harry Reid, you liar!) and on pure innuendo. And the liberal-lefts’ entertainment division led by Jon Stewart and Bill Maher will mock, cajole, and demean him in the most dishonest, uncivil, disgusting or even filthy, and generally unintellectual manner imaginable (but by golly, they’re comedians, and they’re leftists, so it’s A-OK, Jack!).

Most of all, they will continue to avoid talking about Obama’s failed presidency.

So we know we’re right over the target. 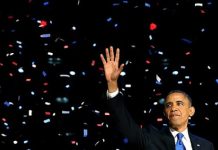