So often when he addresses crowds, Bill Clinton officiates at a marriage of mendacity and excitable ignorance. This was plainly the case in his acclaimed address to the Democratic National Convention in Charlotte. The speech was very well received, and my suspicion is that President Obama’s post-convention poll bounce was primarily attributable to Clinton’s performance.

“No president, not me or any of my predecessors, could have repaired all the damage in just four years,” Clinton claimed, absolving Obama of blame for America’s economic misery since he took office. This is a recitation of the Democratic plaint that Obama “inherited” a mess (notwithstanding Obama’s tripling of an already-massive budget deficit), and it perpetuates the leftist fantasy that the president runs the economy.

Clinton’s image of the president as a repairman, who really needs to get in there with hammer and tongs, maybe holding some nails in his teeth, and tinker with every aspect of the economy, is especially galling because he knows this is nonsense. He knows it because the successes of his own presidency – from his declaration that “the era of big government is over” to Welfare Reform, tax cuts and beyond – came from getting government out of the way and letting the private sector thrive.

To be certain, a president can cripple or ruin an economy, as Obama’s term in office has aptly demonstrated, but the extent to which the economy thrives is inversely proportionate to the amount of meddling an administration does.

Indeed, the “damage” Obama encountered, in the form of the 2008 market crash, was thirty years in the making, and largely attributable to government meddling. President Jimmy Carter mandated mortgages for people who could not afford them in the form of Community Reinvestment Act loans, and Clinton’s own HUD Secretary, now Governor of New York, Andrew Cuomo, threatened lenders with charges of racism and discrimination if they did not extend CRA mortgages.

Admittedly, this was exacerbated by investment whizzes who bundled those risky mortgages into securities, then sold them around the world to bankers and fund managers who should have known better. But how does a president “repair” greed and bad judgment? By signing Dodd-Frank, which codifies that such greedy parties will perpetually be bailed out by the government, if their losses are big enough?

The current “damage” afflicting America is the largest debt in history and unfunded net liabilities exceeding the GDP of the planet. Even if we accept the notion that a president runs the economy, would there be anyone less qualified than Obama, who has added almost $6 trillion to that debt in less than one term, to “repair” it?

Yet there was Clinton, the presumed personification of an economically successful presidency, casting out theories and numbers he knows to be at odds with how he attained that status. The sight and sound shook one’s faith in democracy. The cutaways to the DNC crowd were unhelpful, also – silly people nodding along to Clinton’s statistics as though they’d checked the numbers themselves and could confirm his veracity, blithely unaware of their absurd appearance (it is axiomatic that you can wear a giant foam cowboy hat in public, or be a policy expert – but not both).

“Arithmetic,” Clinton crowed to whoop-whoop approval, was the secret to Democrats’ success. A more accurate reading of history, including Clinton’s own tenure, is that Democrats are successful when they abandon their impulse to central planning and let people get to work.

Economist Thomas Sowell has documented how, from the administration of Warren G. Harding to the present, downturns have been less severe and recoveries more robust when presidents resist the urge to intervene. To wit, whenever politicians get agitated to “do something,” they almost always do it wrong.

Even so, Clinton and other Democrats insist Obama must be re-elected because there is, “more work to do.” What “work” would that be, exactly? More taxes? More spending? More regulations, to go with the tens of thousands of pages Obama has added to the Federal Register?

Command economies don’t work, and demand economies cannot be commanded. America, at least for now, remains the largest market on the planet. That means hundreds of millions of people making independent choices, each pursuing happiness in their own way. Politicians and voters must set aside the conceit that such a complex mechanism can be manipulated by a lone individual. No one person, not even a president, runs the economy. 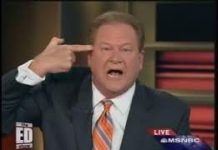 MSNBC host deception: tweets show was “#1 among all of cable news yesterday!!”