Home Canada Rebels without a clue
Share
Facebook
Twitter
Pinterest
Linkedin
ReddIt
Email
In an ideal world, the Vancouver rioters — including the particularly pathetic one who cried to his mom and dad on camera — and the neurotic Gaza flotilla twits who left Toronto this week for the Middle East —  would be forced to fight one another, the winner receiving the last government grant in Canadian history.

But, alas, we are not in control of history and must leave these selfish dunderheads to their own devices. There is, however, actually more commonality between these two groups than you’d imagine.

Privilege. The rioters have the time to stand around drinking and watching hockey games, the protesters evidently don’t have to go to work and can instead go on a cruise to the Mediterranean. Both gangs are overwhelmingly white and middle-class, and have had publicly funded education, health care and bucket loads of quality of life.

Lack of perspective. The rioters think it worthy to smash things because one hockey team full of millionaires loses to another hockey team full of millionaires. The protesters moan on interminably about Israel, when by any objective standard of dignity and decency the Jewish state guarantees more rights to its citizens, Jewish and Arab, than does any nation in the entire Arab world.

Bullying. The rioters beat up and stabbed good, ordinary people trying to defend the peace and protect property purchased through honest and hard work. The protesters isolate the one Jewish state in the world, the result of 2,000 years of anti-Semitic persecution and slaughter, and twist the truth, reshape the facts and scream and shout, so as to try to destroy it.

Hypocrisy. The rioters pretend to be sorry for what they have done in the streets of this great country only when they are caught and exposed as the criminals they are. Two of the leaders announced their homosexuality in Canada, knowing if they did so in their beloved Gaza — or in Egypt, Jordan, Iran, Syria, the West Bank, Saudi Arabia, Iraq, and the rest — they would be beaten, if not murdered.

A footnote: They could proclaim their gay pride in the vile Israel they so detest, where gay rights are enshrined legally and given police protection, especially against the Palestinians who would physically attack homosexuals, even in Tel Aviv and Haifa if they could.

Audacity. There must be a better word for it, but the chutzpah (whoops, Yiddish and thus to be boycotted) of rioters to go running to civil rights organizations when they are attacked by people because of their anarchic brutality.

The protesters are worse. They want to break laws and threaten a fellow democracy, but want the Canadian government to rescue them if they get in trouble.

Violence. The rioters clearly adore it, the protesters pretend to be against it, but in fact only when it comes from Americans or Israelis defending themselves.

Hysteria. The rioters’ hysteria is alcohol-induced; the protester variety comes from a deeper self-loathing, and a hateful core.

Irrelevance. Yes, in the long term. A few moments of publicity and then normal people ignore both. As we should.

A hateful paradox: Queers Against Israeli Apartheid oppose what is really the bitter truth. 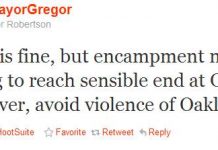 This happened: After weeks of mayor allowing “occupy” encampment to get entrenched…

Cleaning up pre-riot: Six ways to prevent a repeat of London, Vancouver, Philadelphia‎…