LONDON – The England of Shakespeare, Newton and Churchill has become a country more concerned with compliance than accomplishment. There is little that evinces this decline so clearly as the conduct of the British tax department and the general attitude of servility toward the nation’s public sector.

Last week, Britain’s coalition government conceded that their plan for closing the budget deficit will not be completed by 2015, as promised. Among the remedies proposed by Chancellor of the Exchequer George Osborne and others is the standby of sticky-fingered government-types the world over: ensuring taxpayers pony up their “fair share.”

There is no way an intelligent man like Osborne believes that wringing yet more money out of people who often find themselves forking over 60 percent of their income to the government is a practical solution. In fairness, he has also proposed spending cuts and a reduction in borrowing. Even so, the fixation of the nation’s governing class on squeezing every ha’penny they feel they are owed from citizens is animated by the modern British fetish for control and compliance.

Along with new measures to raid Britons’ bank accounts in other countries, London’s Telegraph newspaper carried a front-page report that “tax hitmen” will be deployed to pore over citizens’ spending records, to assess whether their purchasing seems consistent with the tax they have reported. Proponents of such Kafkaesque silly-bears suggest the measure could raise as much as 10 billion pounds.

Now, in the time it takes to say 10 billion pounds, a welfare state like Britain can easily spend 10 billion pounds. And that assumes the figure is net: Will the snoops of HM Revenue and Customs be working on this file for free? If not, be assured that their corpulent enforcement mechanism can gobble down the expected returns at a rate that would put Monty Python’s Mr. Creosote to shame.

Recently, a British family known to me, having just paid a tax installment of over a quarter-million pounds, were found to be a few days behind on a separate, tiny tax bill amounting to a few hundred quid. The result was a stream of government vehicles, filled like clown cars with collection agents, pulling up to their front door.

“Ooh, this is a lovely place, i’nt it?” one sneered to the lady of the house, scrutinizing her home with that combination of urgency and self-satisfaction peculiar to public sector scolds. She responded that there was no arithmetic whereby the petrol, paperwork and professional hours consumed by the squadron of snotty civil servants pawing about her yard was justified by the piddling amount they came to collect.

But again, it wasn’t about the money, it was about the rules. And when rules are the priority, government enforcers will descend on a suburban family about a matter of a couple hundred bob as though they had cornered Al Capone for tax evasion.

The reality is that Britain’s fiscal troubles are not caused by people paying too little in taxes. Its overgrown government apparatus simply spends too much and has been temporarily spared the economic collapse seen elsewhere in Europe by the grace of God and the retained ability to print its own currency. But it is utterly anathema to the nation’s politicians and civil service that liberating the private sector, urging Britons to spend, invest and hire, is the path to prosperity.

Oscar Wilde once quipped, “The bureaucracy is expanding to meet the needs of the expanding bureaucracy.” How interesting that an Irishman who spent time in an English prison should encapsulate the British condition so neatly.

And the bureaucracy’s growth is guarded and abetted by agents of HMRC, who behave as though they are in a trans-Atlantic rivalry with the IRS to see who can be more officious and obnoxious. For them, rules must be upheld, even if they do no bloody good.

This prioritization of compliance is complemented by a culture of surveillance, both figurative and literal. London has more closed-circuit security cameras than any city in the world, such that a person going about one’s business in the British capital is filmed 300 times per day. Meanwhile, inspectors creep around residential areas on behalf of the BBC, checking whether people are watching television without paying a licensing fee to support the public broadcaster.

Not to be outdone, the tax department has recruited schoolchildren to its spy ranks. This past summer, it was reported that HMRC was encouraging pupils as young as 11 to tell their teachers of “anyone in their local area who is not paying their fair share of tax.” Again, we must assume such an initiative is philosophical, born of a need to monitor and control, rather than practical – unless one actually believes the budget deficit could be closed by sending the nation’s youth about like the Village of the Damned kids with calculators.

Britain, which bravely stood up to dictators time and again through the centuries, including no more than a couple generations ago, now shrugs blithely as Big Nanny shoves her stout fingers into every aspect of citizens’ lives. It’s not so much that the state does all this – it has always been the impulse of governments to render individuals legible and accountable – it’s that today’s Britons don’t seem to mind.

Some say this modern, docile mindset is born of Britain’s shame over its imperial past. Whatever the cause, a people who used to rule two-fifths of the globe willingly line up to be counted, scrutinized, taxed and accused. A nation once famous for its will to conquer now prefers simply to queue.

My Speech to the NAACP 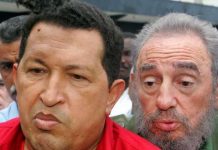 Obama assumes control over health insurers: “…nationalization in all but name…”