…The GOP will probably lose the public relations battle over the sequester, because that’s the Republicans’ job in the age of Obama. A U.S. ambassador is murdered in a terrorist attack the administration ineptly responded to — and blamed on a video — but the only real story is that Republicans are so crazy, they want to know what happened. The president nominates a middle-brow pol to run the Defense Department, one who must recant all of his well-known views in order to get the job, 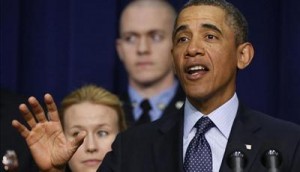 and the story is how irrational the GOP is for caring. If the White House dispatched a drone to circle Boehner’s home, the front-page story in The New York Times would be on the speaker’s troubling paranoia…

…The federal government has grown inexorably for decades. Our president casts himself a Solomonic manager, and yet he is saying that absent a few extra pennies on every dollar there’s no way he can maintain government’s core functions? A manager in any other field of human endeavor would be fired on the spot for making such an argument. But in Washington this passes for leadership.

This all reminds me of an anecdote I’ve alluded to before: let’s say the weatherman predicts a high temperature of 80 degrees, but it only reaches 78 degrees. In Obama and Democratic Party-land, that means the temperature is MINUS TWO. Or to parlay it into Obamanomic terms, a “cut” of two has been accomplished under his ingenious leadership! And then the left and their media division use that as an example of how “brilliant” Obama is, providing us with yet more inculpative evidence as to the existential obtuseness of the left in general.

As usual, you can also glean such wisdom from the comments to news articles or opinion columns. This is the first comment:

President Obama is now going to tell the world what a horrible shrew my wife is for requiring me to spend two dollars less than I had originally planned.

THAT’s what the sequestration debate is all about.

Democrats are evil and are cynically demagoguing the issue. Republicans are afraid of the false accusation that THEY are evil so, if they follow true to form, they will capitulate to the demagoguery of the Democrats.

The Crossroads GPS group has the big bucks to produce snazzy videos, like this one which is good as far as it goes, but which I hasten to add sort of misses the point, inasmuch as it hits on who’s idea “sequester”  was more than the fact that the “cuts” in spending are not cuts, missing the opportunity to point out yet another Obama lie. And it misses that the cuts are relatively miniscule in any case, which puts a lie to Obama’s grand campaign-style lie tour currently underway at massive taxpayer expense which the Chinese taxpayer who lent America the money to pay for it hope to get back someday.