For more than two years I wrote a men’s column for a rival Canadian daily newspaper.

I’d never even considered men’s issues before, but the editor of the publication wanted the subject to be covered, so I obliged. And thus the door was opened to a world I had never even imagined.

Divorced fathers denied access to their children, even though they paid enormous amounts of child and spousal support and the courts had awarded them joint custody. Women having affairs who had decided to, as lawyers say, “clean house” by telling the police they were being abused. They weren’t, but the cops were obliged to arrest the husband and prevent him from returning to his home.

Men who were themselves victims of chronic physical and emotional abuse being told by the authorities to “suck it up and be a man,” men taking their own lives because their children were turned against them by angry ex-wives. Each time I covered such stories, I would receive myriad letters from men pleading for help.

I mention this because last month Warren Farrell, named by the Financial Times as one of the top 100 thought leaders and author of a number of vital and bestselling books, was due to speak at the University of Toronto.

His subject was the crisis among boys and how they were not doing well educationally, leading to multiple adult problems.

Farrell is enormously respected for his challenge to the assumption that men have total power, and he is also controversial because he has questioned some of the statistics about abuse, rape and gender imbalance.

He supports his claims with a great deal of research, of course, but none of this matters to those who would silence him. There were around 100 of these fanatics at the university before he spoke, ripping down posters, threatening and insulting anybody who tried to attend the lecture, and explaining as only heavily funded students can do, “You should be f—ing ashamed of yourself, you f—ing scum” to those with whom they disagreed. There is ample video evidence.

They gave Nazi salutes to the police and screamed in their faces that they were “f—ing scum and f—ing pigs,” including to the women police officers.

Why some of them were not arrested is beyond me, as they were clearly physically intimidating other people. But failure to arrest violent thug leftists is now common at such events.

The ugliness and stupidity of the mob was invincible. Caked in bad makeup and piercings, their faces creased in hatred and self-loathing, they screamed at Farrell and anybody who wanted to hear him — supporters or opponents — and tried to block all of the exits and entrances. They laughed at and abused anybody who told personal stories about tragedy and suffering, chanted that men’s rights groups were hate groups, and proudly stated their intention was to close down the event and prevent free speech.

In spite of all this, Farrell did speak, and spoke well. But to think that feminism has so often become this, and to see the true shape of the contemporary women’s movement is sad indeed. As the left so like to say, “shame, shame, shame.” 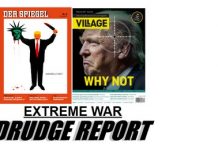 I Will Pray For You

Feminists Are No Better Than Frat Boys