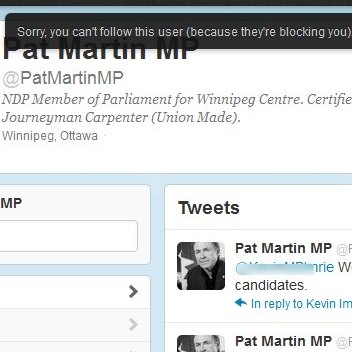 Socialist MP Pat Martin doesn’t follow me on Twitter, even though I fancy myself an ever so witty and informative Tweeter. But then conservative author and pundit Ann Coulter doesn’t follow me either, and I pay her for her column every week!  Wait. I help pay Pat Martin’s salary too. Maybe my Twitter handle should be @sucka. And maybe nothing should surprise me anymore.

But MP Pat Martin taking that extra step of blocking me from following him is a pretty odd thing for a taxpayer-paid MP to do to a citizen for no good reason. To wit: 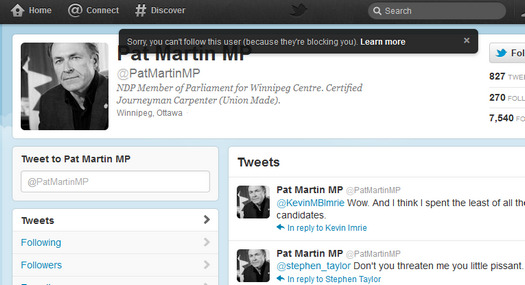 I used to follow Pat Martin, but I thought I’d “unfollowed” him some time ago, not just because of his foul-mouthed personal insults and rants against other citizens, but mostly because he bored the hell out of me. Also, he’d chosen not to follow me back, and that just sucks, as all Tweeps know. But when I thought I’d give him another try this morning, after I’d noticed he called one of my follows (a fellow citizen) a “little pissant” this morning in just the latest example of his

personal insults against a private citizen, I was stymied.

So darn the luck. I was hoping he’d call me a “big pissant,” for no particular reason, in an ever so witty and intellectual allusion to my even lesser importance to the nation (sort of like calling someone a shrimp, then calling me a jumbo shrimp, except using hateful, uncivil, and decidedly un-parliamentary terminology instead). Or maybe drop the F-bomb on me like he did to another guy who didn’t agree with him on something rather banal.

It’s not like I’ve ever exchanged words with Martin on Twitter or anywhere else. So I’m guessing he’s blocked me because he doesn’t believe in my politics and my tweeting and blogging technique, which is (1) decidedly conservative, and (2) decidedly bold and truthful, here at BoldColors.net or at my former haunt ProudToBeCanadian.ca, and on my Twitter feed, which among other things (3) involves exposing leftists and other members of the intolerant set like him as the uncivil, foul-mouthed, anger-filled, taxpayer-paid hypocrites that they are.

Like when I did this a few months ago, which I blogged about here: UPDATED: Canadian left-wing Member of Parliament Pat Martin (NDP) Tweets “f*** you” to citizen.

I guess he doesn’t want me to see what he’s up to. And I guess he’s not very tolerant of opinions which are not socialist. I sure wish I didn’t have to pay him, especially for the taxpayer-paid time he spends on Twitter, insulting private citizens.