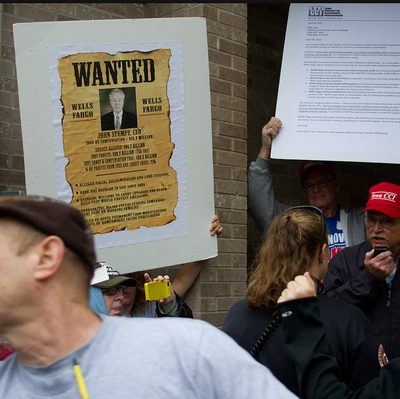 Using the same radical, militant tactics that radical far-left and full-on socialist zealots such as ACORN used in the 1990s and 2000s to force banks to give sub-prime mortgage loans and other loans to people who had no business borrowing money, the far-left group MoveOn.org is now advocating more of it  —  but under a new, shall we say “borrowed” name. They actually seem to be trying to hijack the most radical and militant elements of the “Occupy” movement and their “99%” rhetoric, in additional to the revolutionary rhetoric of the “Arab Spring” to do it. They’ve dubbed their latest sortie “The 99% Spring” offensive, in which they promise to train militants to “confront the 1%.”

Here’s a snippet from an email dispatch from MoveOn.org this week, in which they boast of attacking the personal family home of one bank executive, after one of their apparently militant “training” camp exercises (or as their email puts it, “nonviolent direct action trainings”, snarf). See if this sounds like America to you: 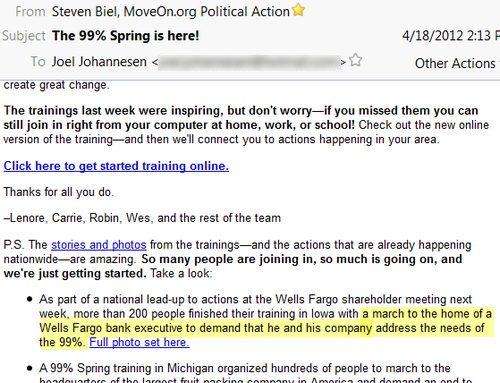 But upon further investigation, it actually seems to be a part of a broader hijacking of the leftist “Occupy” movement (or at least radical extremists within that movement), by a cabal inspired by, if not led by, Barack Obama and his campaign, the Democratic Party, and leftist community organizing groups, including the infamous Iowa CCI, a militant left-wing “community organizing” group which even the Democratic Party has disavowed in the past. In a story at alJazeerea.com, they report that “Occupy” organizers are upset that the hijacking may be rooted not just at MoveOn.org, but right in the Barack Obama and Democratic Party re-election campaign.

Is the Occupy movement being hijacked?

[…] But now a rival group has emerged – called the 99% Spring – which says it wants to train protesters for a campaign of peaceful protest.

Critics have denounced the group as a Democratic Party attempt to galvanise support for President Barack Obama’s re-election campaign. Nonetheless, some former Occupy protesters are now advocating that change should come from within the government itself. …

Well it’s fun watching them all fight each other over who’s responsible. But this whole thing  —  the “Occupy” movement, MoveOn.org, the radicals at Iowa CCI, and this latest militant “training” and organized protest of personal family homes of citizens  —  sounds like Barack Obama’s America, that’s for sure. This is Obama’s so-called “community organizing” in action.  This “community organizing” has been the totality of Obama’s life experience in his effort to, as he put it during his election campaign, “fundamentally transform America.” Into what, exactly, we are slowly discovering, to our dismay.