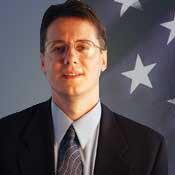 It was good seeing you the other day at lunch. I meant to share a story with you but the room was too crowded and the story is too long. So I write to you today sharing something that will surely lift your spirits just the way you lifted mine when I first heard you speak in May of 2007.

My first visit to your church came during the worst time in all of my life. I was struck with personal tragedy in January of that year. That was followed by another tragedy in February, one in March, one in April, and one in May. Things would settle down in July but had I waited until then to visit your church I might not be writing you today. I’m still surprised that my heart or head did not just explode during all of the turmoil in that tragic time of my life.

On my first visit to your church, I listened intently to your sermon on the first letter of John in the New Testament. It was moving – so much so that I made it the subject of a column called “How to Read the New Testament.” Looking back, I am not sure I still agree with everything I wrote in that column. But I did and still do agree with the manner in which you said we should read that letter. You said it should be read like a love letter written just for the reader by someone who is madly in love with him (or her).

Of course, one does not read the entire Bible the way you suggested we read the first letter of John. But your advice was specific to that book. So I walked right out of your sermon and straight over to Barnes and Noble. I bought the ESV translation of the Bible and started reading it over lunch. I ended up reading that first letter of John every day over the course of the next week. Since I wrote a column about it you know how beneficial I found your advice to be.

In the nearly five years since I wrote the column, I have given it very little thought. Then, just the other day, a fellow wrote asking for a link to the column. He wanted to use it in his Sunday school class. Oddly, I received a second email about the column just 24 hours later.

The second of the two letters was far more dramatic and memorable than the first. In it, a man wrote a long and painful account of a series of tragedies in his personal and professional life. I would not have kept reading it had I not seen the reference to the aforementioned column as I glanced casually over the text. It was only the coincidence of getting two emails two days in a row (on the same very old column) that kept me reading.

Eventually, I reached a portion of the email in which my reader said “thoughts of suicide entered my mind each day – every day. Earlier this year, the pain became so intense that I knew that I would either have to find my way back to Christ, or I would have to die.” That was alarming but I kept on reading. I’m glad I did.

The reader continued, “I would have to return to His Word. However, the Bible seemed to weigh a thousand pounds, and I could neither lift it nor open it. Exacerbating this situation was the fact that I realized that I was a coward; I was afraid because the world has become increasingly and vehemently hostile to Christians and Christianity. I knew that reaffirming and declaring faith in Christ would make me a target of the same hatred, ridicule, and scorn I had heaped on others, and I wasn’t ready for it.”

My reader then informed me that, in the midst of his depression, on the brink of suicide, he came across a column I had written. For some reason, he thought that something I said somehow took courage. So he started working backwards through my column archive. Eventually, he read the column referencing 1 John and your sermon that had inspired it. He ended his letter saying that was the very day he found the strength to pick up his Bible and start his journey in the Word anew.

He continued reading his Bible every day. The Book that once “seemed to weigh a thousand pounds” became light as a feather. As he continued to read, his thoughts of suicide disappeared. They were replaced with a burning desire to live again and to walk in the light of forgiveness.

As I read that man’s letter, I realized that it had been a very long time since I told you what your words did for me in my darkest hour. I hope you will forgive me as I am still seeing what those words have done – not just for me, but through me. I am beginning to understand what John meant when he said “What we will be has not yet appeared.”

The ripple effect that flows from our words and from our actions extends far beyond the reach of human perception. It will not be fully revealed until we reach the other side. That is why we need the Word to lift us out of our desperation and move us beyond our present circumstances. It helps reveal the only Light that can lead us out of darkness.