President Obama’s friend and adviser (and campaign donor… huh…), Warren Buffet, touts the notion that rich people like him (who already have all the money in the world) should be forced by the government to pay more income taxes.

Trouble is, most of the “rich people” he’s talking about aren’t “like him” at all. 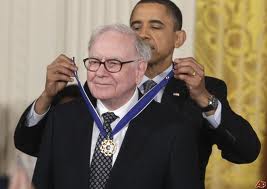 And notably, Buffett himself doesn’t willingly send any extra cash to the government, even though there is a U.S. Government account set up for just such gifts from folks who want to pay more of their income to the government. He has even said that money could be better put to use outside of government (like to his own interests) than by his handing it over to the government for them to dole it out.  So it’s weird that way.

Naturally, Obama loves him for touting such nonsense anyway.  Obama and all liberals want people to pay more taxes so they have more money to to grow the government and control more of America and cause even more people to become even more reliant upon the big nanny-state government, because government knows best.  Better than you.  About everything.  Every. Thing.  And because it’s not fair that other people have more money than you, and you have a right to their money.  Etcetera.

So today, the Wall Street Journal explains some of the reasons to question Warren Buffett and his weird (political) science.

The billionaire volunteers the middle class for a tax increase.

Barney Kilgore, the man who made the Wall Street Journal into a national publication, was once asked why so many rich people favored higher taxes. That’s easy, he replied. They already have their money.

That insight is worth recalling amid the latest political duet from President Obama and Warren Buffett demanding higher taxes on “millionaires and billionaires.” Mr. Buffett is repeating his now familiar argument this week, coinciding with Mr. Obama’s Midwestern road trip on the economy. Since the media are treating Mr. Buffett as a tax oracle, let’s take a closer look at some of the billionaire’s intellectual tax dodges.

• The double tax oversight. The Berkshire Hathaway magnate makes much of the fact that he paid only 17.4% of his income in taxes, which he considers unfair when salaried workers often pay more. But Mr. Buffett makes most of his income from his investments, in particular from dividends and capital gains that are taxed at a rate of 15%.

What he doesn’t say is that much of his income was already taxed once as corporate income, which is assessed at a 35% rate (less deductions). The 15% levy on capital gains and dividends to individuals is thus a double tax that takes the overall tax rate on that corporate income closer to 45%.