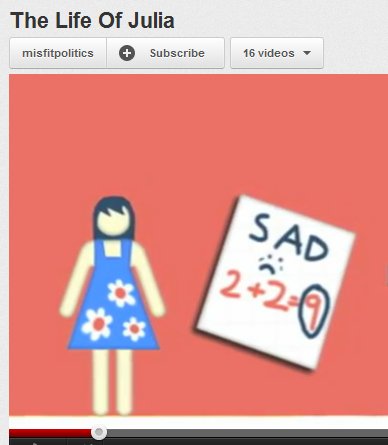 Misfit Politics has a much better take on Barack Obama’s “Julia,” whom Team Obama touts as a useless, helpless woman who can’t make it on her own and has to rely on Obama’s benevolent state welfare and entitlements and sundry state handouts for her very survival — much as a good North Korean gal might. (But don’t worry, Obama and the Democrats love women! And think they are “empowered” to do anything!…with tons of government help throughout their entire lives…)  Yes, even as Julia “decides to have a child” — with nary a mention of any bothersome husband (how modern and liberal!), she benefits from Obama’s vision of North Kor… sorry America. In actual fact, it’s exactly not America as we know it. It’s Obama’s fundamental transformation of America. How long before Obama’s team take this travesty down? It’s currently being totally mocked by sane people on Twitter and Facebook and everywhere else outside of Obama’s campaign HQ, much as his “Attack Watch” claptrap, and so many other mammoth gaffes, have been. So, not long.