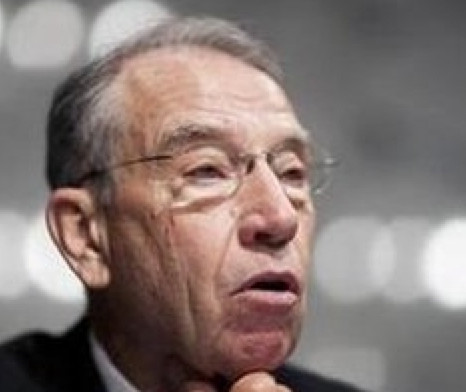 While we have high hopes that the newly empowered Republican Members of Congress will make every effort to fight the socialization of America, we are also aware that the GOP has an ignominious history of wimping- and/or selling-out, especially on environmental issues. Wimp & Sellout Watch is GreenHellBlog’s effort to spotlight the GOP’s weak links because:

In the 112th Congress, it should take more courage for GOP-ers to retreat than to advance.

Sen. Chuck Grassely (IA). Climatewire reported today that, “Germany’s Siemens AG and MidAmerican Energy Co. are expanding their wind energy partnership in Iowa, rolling out plans to add to the state’s wind capacity in 2011.” No doubt this means Grassley will be even more incentivized to push for anti-carbon policies.

Sen. George Voinovich (R-OH), a senior member of the Environment & Public Works Committee who is retiring after two terms in office, says he is optimistic about the chances for bipartisanship in the 112th Congress, pointing to the election of moderate freshmen senators such as Rob Portman (R-OH), who is taking Voinovich’s seat, and Christopher Coons (D-DE), who won after moderate Rep. Mike Castle (R-DE) lost a primary challenge from a Tea Party candidate, as potential deal-makers in the new session, along with current moderates like Murkowski and others. [Emphasis added]

Portman is also a supporter of so-called “clean coal,” which means carbon capture and sequestration (CCS). Ohio’s major utility, American Electric Power, is a proponent of CCS as it expects to receive hundreds of millions in taxpayer largesse for burying a miniscule amount of carbon. Aside from its taxpayer boondoggle aspects, CCS is little more than a sticky pad for trapping utility cockroaches into supporting cap-and-trade.

We don’t know whether Voinovich knows of what he speaks, but considering Portman’s CCS tendencies, he will need to be watched.

Rep. Fred Upton (MI). Not only did Upton publish a wimpy strategy for protecting American from the EPA’s greenhouse gas regulation, but last week on Fox News Sunday, he said,

We want to [regulate carbon] in a reasonable way.

But what could possibly be reasonable about junk science-fueled regulation?

Sen. Lindsey Graham. While Sen. Graham does get credit for backing out of the ill-fated Kerry-Graham-Lieberman cap-and-trade bill, he apparently has yet to learn his lesson. In December, Graham began floating the idea of a “clean energy standard,” which is little more than a carbon cap with lip service paid to increasing nuclear power. He told Climatewire at the time,

“I’m concerned that if the Republican Party doesn’t embrace the idea [that] it’s OK to clean up the air, we’re gonna lose young people forever. Whether you like it or not, young people are environmentally sensitive. I happen to like it.”

I suppose the rest of us are environmentally insensitive. We must not breathe the same air as Graham’s morally superior youngsters.﻿

Great idea! And we’ll be helping every step of the way.