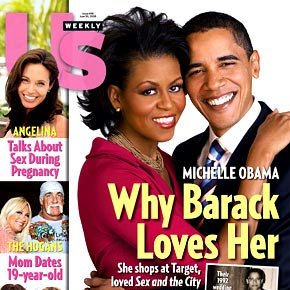 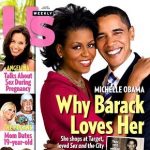 Possibly the stupidest anti-conservative/anti-Palin mainstream media gaffe of the week (so far  — it’s only Wednesday!), as caught by a Web site called “Gossip Cop”, and later also written-up by the related site Mediaite.com:

US WEEKLY wrote another hateful drive-by character assassination attempt  hit-piece  —  sorry an “article”  —  today about Sarah Palin and an interview with Fox News Channel’s Sean Hannity, quoting Palin as saying horrible things about singer Christine Aguilera and her botched Super Bowl National Anthem performance.  Let’s be clear:  they quote Palin.  They hold this out as a factual story.  They really believe it is.  For example:

“Unemployment is at nine percent, yet we have to suffer through a performance by a foreigner with a poor grasp of the English language”

Trouble is, it’s based on a completely phony source  —  a source which even admits it’s phony.  It’s a satire site.

After massive research lasting 1.7-seconds, I found this from their source.  It’s the satire site’s “About Us” page, which the US WEEKLY reporters and editors somehow missed despite their obvious smarts and objectivity and tolerance and compassion and Pulitzer-Prize-worthy professionalism and..:

Super Tuesday News is a satirical news site launched in January 2011 to lampoon the events, circumstances and players of the 2012 United States Presidential election.  We are based in Los Angeles, California.

Irony abounds —  The man behind GossipCop.com, Michael Lewittes, is the former news director for… Us Weekly. The GossipCop.com co-founder is Dan Abrams, who is also in charge at Mediaite.com, a legal commentator often seen on TV.  He’s also the Chief Legal Analyst for NBC News …and MSNBC (read on!).  US WEEKLY was founded by… the New York Times.  My my.

I wanted to give you a link to the idiotic US WEEKLY story, but they seemed to have lost the entire article.  Just…. disappeared.  Weird.  And very professional.  No apology could be found.  But not to worry:  here’s the US WEEKLY story before they scrubbed it: 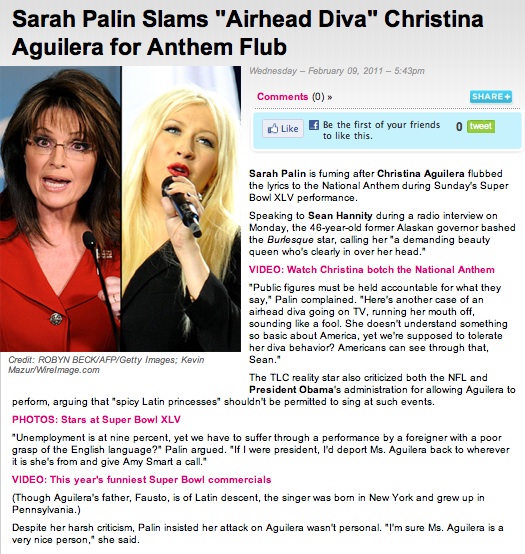 And you don’t have to do a lot of research to figure out how the mainstream media hate/idiocy meme surrounding Sarah Palin and other conservatives gets spread around, and how it is that so many people end up thinking   —  “knowing!”  —  Sarah Palin or the tea party folks, or any conservative is, oh, “stupid,” or “racist,” or “homophobic,” for example.  A quick Google search for the exact US WEEKLY headline produces well over 400 links to the many (no doubt mostly liberal) web sites which posted that US WEEKLY (false) story, also as fact, showing that they are as easily fooled by the foolish, in effect.  They have all been made to look stupid, by stupid people, who all think they’re smarter than Sarah Palin, but who clearly are vastly more stupid, unfair, blinkered, and gullible. (And if that doesn’t teach you something about what Palin  —  clearly credibly —  calls the lamestream media, then you’re more stupid than even them!)

Here’s a snapshot of page one of that search, but it goes on for dozens of pages of sites which posted that US WEEKLY article: 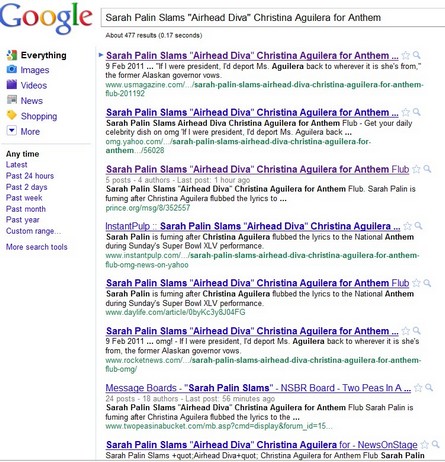 Go to those sites to which Google provides handy links, and some of them have dozens or hundreds of comments on the story they posted, from folks who, each in their turn, has been similarly led by fools before them into thinking this actually is true.  That it’s actually based in fact.  Like the phony “I can see Alaska from my house” canard which was actually coined by a Saturday Night Live comedian.

One example amongst the Google search: after the US WEEKLY listing itself, Google lists a blog operated by YAHOO.COM called “OMG.YAHOO.COM”.  Here’s the link.  Their version of the story has dozens and dozens of comments — from the subsequently fooled.  That’s YAHOO.COM  — a purveyor of news and information!

Just last week or so, MSNBC’s star anti-conservative drive-by smear show (sorry  — “news analysis!”)  —  hostess Rachel Maddow got caught in almost the exact same thing, quoting, on air, as fact, a story about Palin that was written up by another fake news/satire site.   The next day she had to admit on-air she’d been duped, but rather than “man-up” about it, she opted to blame it on… conservatives, because, well, the stupid things conservatives always say, made it all so believable.  See hows that logic works?